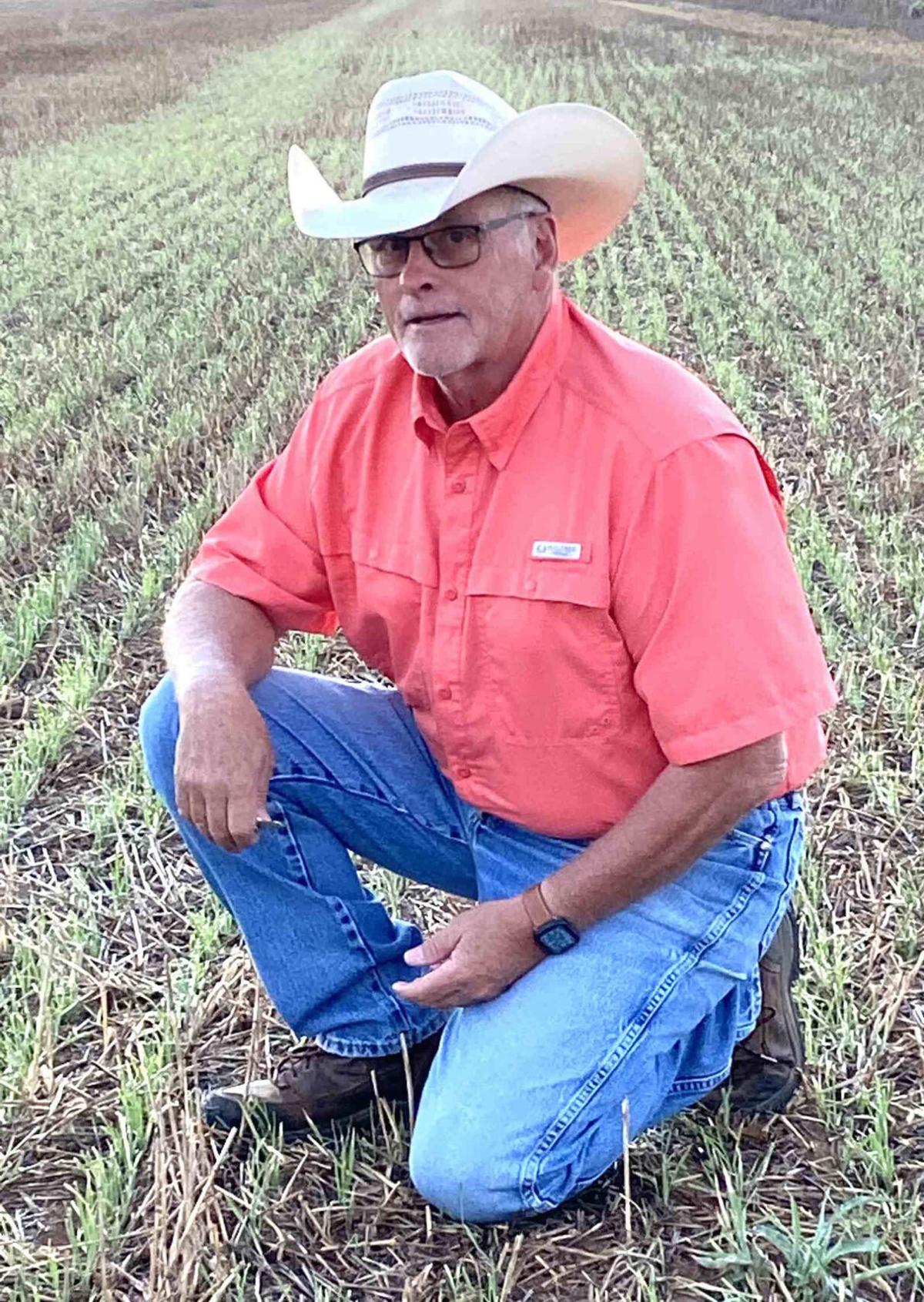 Lee Brandt has grown several Oklahoma State University wheat varieties over the years but really felt like he hit the jackpot last year with OK Corral. Grain yields exceeded 60 bushels to the acre even after heavy grazing. (Photo by Laura Radford Photography) 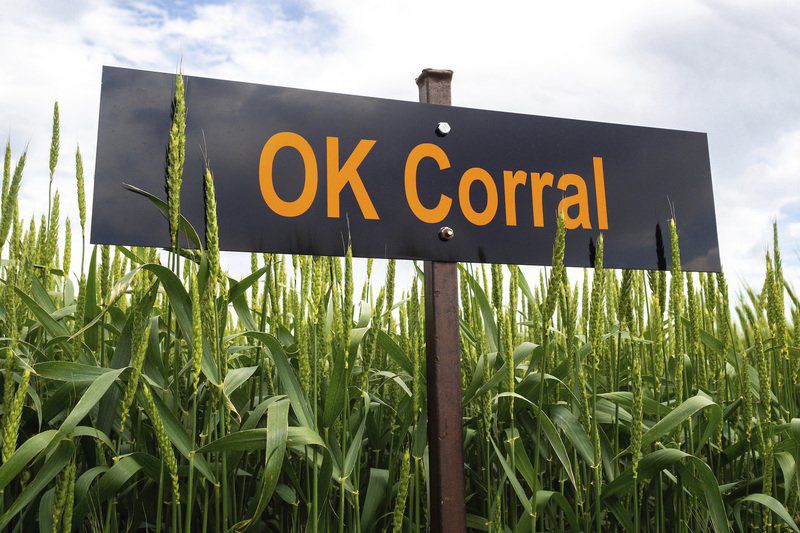 Released by Oklahoma State University in 2019, OK Corral is a beardless wheat with exceptional grain yield potential and excellent bread baking quality in addition to being ideal for haying and grazing. (Todd Johnson / OSU)

Lee Brandt has grown several Oklahoma State University wheat varieties over the years but really felt like he hit the jackpot last year with OK Corral. Grain yields exceeded 60 bushels to the acre even after heavy grazing. (Photo by Laura Radford Photography)

Released by Oklahoma State University in 2019, OK Corral is a beardless wheat with exceptional grain yield potential and excellent bread baking quality in addition to being ideal for haying and grazing. (Todd Johnson / OSU)

CAPRON, Okla. — Despite lingering hot dry weather and an unusually high prevalence of armyworms, one Northwest Oklahoma farmer is hopeful about the prospects for wheat pasture grazing this fall, assuming there’s enough moisture to bring the wheat up.

Lee Brandt, who owns LK Cattle Company with his wife Sharon, their daughter Laura and her husband Kevin Radford, started seeding wheat in the Capron area at the beginning of September, with the goal of having everything planted by the first of October.

“We are planting into some no-till ground first, basically just dusting it in so if we get a rain it will be there,” he said.

Like many farmers in the area, wheat for him is a dual-purpose crop. He grazes it through the winter before pulling the cattle off in the spring and harvesting it for grain.

Last year he tried a new variety that really impressed him.

OK Corral was released by Oklahoma State University’s wheat breeding program in 2019 designed specifically to meet the needs of the wheat-stocker segment.

“For the way we operate we were really pleased with it,” Brandt said. “We grazed 480 acres really hard through the winter, and in addition to the really good grazing we got, we had one quarter make 65 bushels to the acre and a half section that made a little over 62.”

Those are good dryland yields even by the standards around Alva, which is considered prime wheat growing country.

Brandt was so impressed he plans to plant it on at least two-thirds of his acreage this fall.

“The test weight was fantastic. The protein was a little low, but the 10-bushel yield advantage made up for that,” he said.

OK Corral is beardless, which means it remains more palatable after heading and more versatile for livestock operations. Brandt said this year he would likely try putting some up as silage, a popular feed option in an area with many small feedlots that prep lighter-weight calves for the finishing phase.

Biron Shirley, who sold Brandt the seed, also runs stocker cattle on wheat in addition to operating the seed business and a large cow-calf operation in the Alva area.

Yield-wise, the variety topped OSU’s test trials at Cherokee and came in second in Woods County.

Shirley sells several varieties developed by OSU that cater to various purposes. Over the years, the sophistication and diversity of OSU’s breeding program has led to a wide range of offerings that match well with different management goals and approaches, he said.

“Butler’s Gold has been interesting to watch,” he said. “They told us we can plant it as late as December. We tried planting some in January, and it made in the 40s even though the ground wasn’t our best, so I was really happy with it.”

More acreage is being farmed no-till and double-cropped, so there’s a benefit to having a variety that can be planted late after summer crops are harvested, he said.

“Planting fall-harvested crops spreads out the weather-related risk to the farmer, and it spreads out the harvest, so everything isn’t coming off at the same time. It’s a risk management tool that really helps us,” he said.

“I’m curious to see what it does next year,” Shirley said. “The yield hasn’t been as good, but the baking quality is tremendous. I think it’s something to look at if you want to go for a bonus price by selling it direct to the flour mill.”

Shirley himself typically delivers whatever he can’t sell as certified seed to Enid’s ADM mill over the winter in exchange for a premium.

Of all the options, OK Corral is uniquely positioned to excel at winter grazing, a practice that is still common although it has fluctuated over the years based on market and weather conditions.

“Last year I saw more cattle on wheat than I had in a long time,” Brandt observed. “If we get some moisture and can plant it in time, I look for a little more stocker grazing again this year.”

Stand establishment is currently being threatened not only by drought, but also by armyworms, which have made headlines around the state and the country.

“The problem seems to be worse south of Alva,” Brandt said. “Basically there are two things you can do: you can treat the seed, or you can spray after the wheat emerges when you see a population that warrants it.”

OSU entomologist Tom Royer has fielded numerous calls on the topic, and he’s not alone. Colleagues in other regions of the country have seen armyworm populations that are far worse than usual.

“Even in North Carolina, and in places like that, this is probably the biggest flush of armyworm infestations they’ve ever seen,” Royer observed recently. “It’s a big one here in Oklahoma for sure.”

Two distinct strains exist. One that prefers Bermuda grass and rice as well as wheat overwinters in Florida and probably traveled to the area on southeasterly winds, he said. The other strain favors corn.

“Wheat that’s getting ready to be planted, or anybody who wants to put up grass hay for winter feed, or even if you have late-planted sorghum, all three of those are threatened by fall armyworm,” Royer said.

Brandt is used to the ups and downs of farming, but said lately markets and growing conditions have been especially erratic, with a whole new set of unknowns introduced by the coronavirus pandemic.

“There are so many factors in addition to what we are used to dealing with, it’s maybe a fool’s errand to predict anything,” he said.

Looking back, looking ahead

Brandt has been farming full-time since 2007. Prior to that, he worked for Alva State Bank for 26 years.

He and his wife worked hard and saved in their early years so they could buy 160 acres of land at a time and built up a ranch of their own.

“I didn’t grow up on a farm, but my dad started the agriculture program at Northwestern Oklahoma State University in 1952, so I was always around agriculture and growing up I worked for farmers,” he said.

He also worked with agricultural customers at the bank.

“It was certainly an education,” he said. “You do get a birds-eye view of successful operations and how they do it.”

Diversification of farm enterprises is a trend that has intensified over the years.

Brandt’s ranch is no different. Among other things, his family charges guides a per-person fee to take people duck and goose hunting on their property.

Brandt always liked horses, and his daughter grew up sharing that love.

“Her husband breaks all of our horses, and he’s a way better horseman than I am. He is a perpetual student of it. He and my daughter are the backbone of the horse operation,” Brandt said.

Tools like improved wheat varieties — which in the case of OSU’s are funded through public investment and a voluntary contribution producers pay on every bushel sold to proactively support their industry — have allowed him to continue caring for the land while passing on the rural way-of-life to his children and grandchildren.