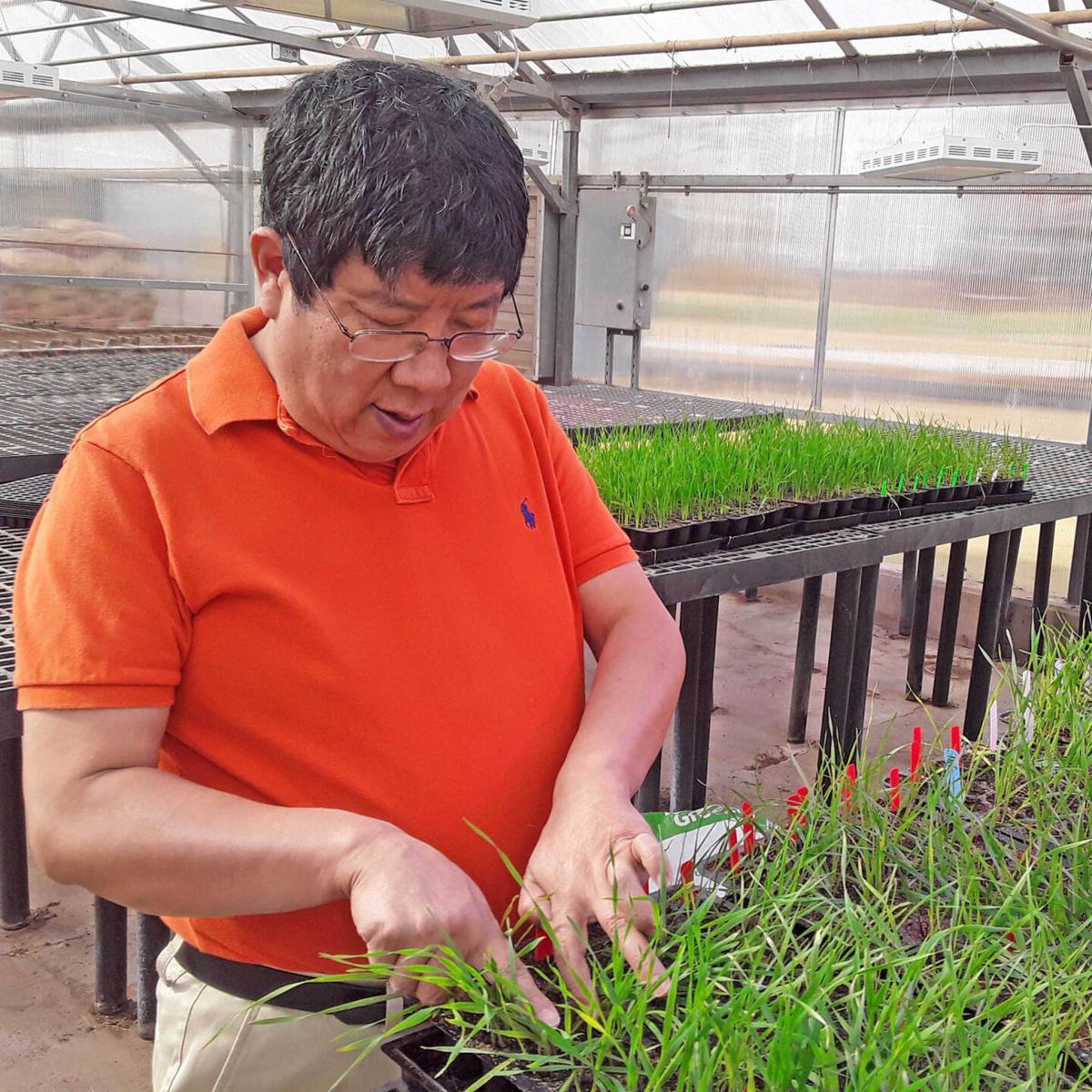 Research geneticist Xiangyang Xu studies how wheat specimens respond to a greenbug infestation at the USDA-ARS Wheat, Peanut and Field Crops Research Unit in Stillwater. Comparing observational results in the nursery with unique patterns in the genetic code allows him to speed up the process of introducing insect and disease resistance into existing breeding lines. (USDA-ARS Photo) 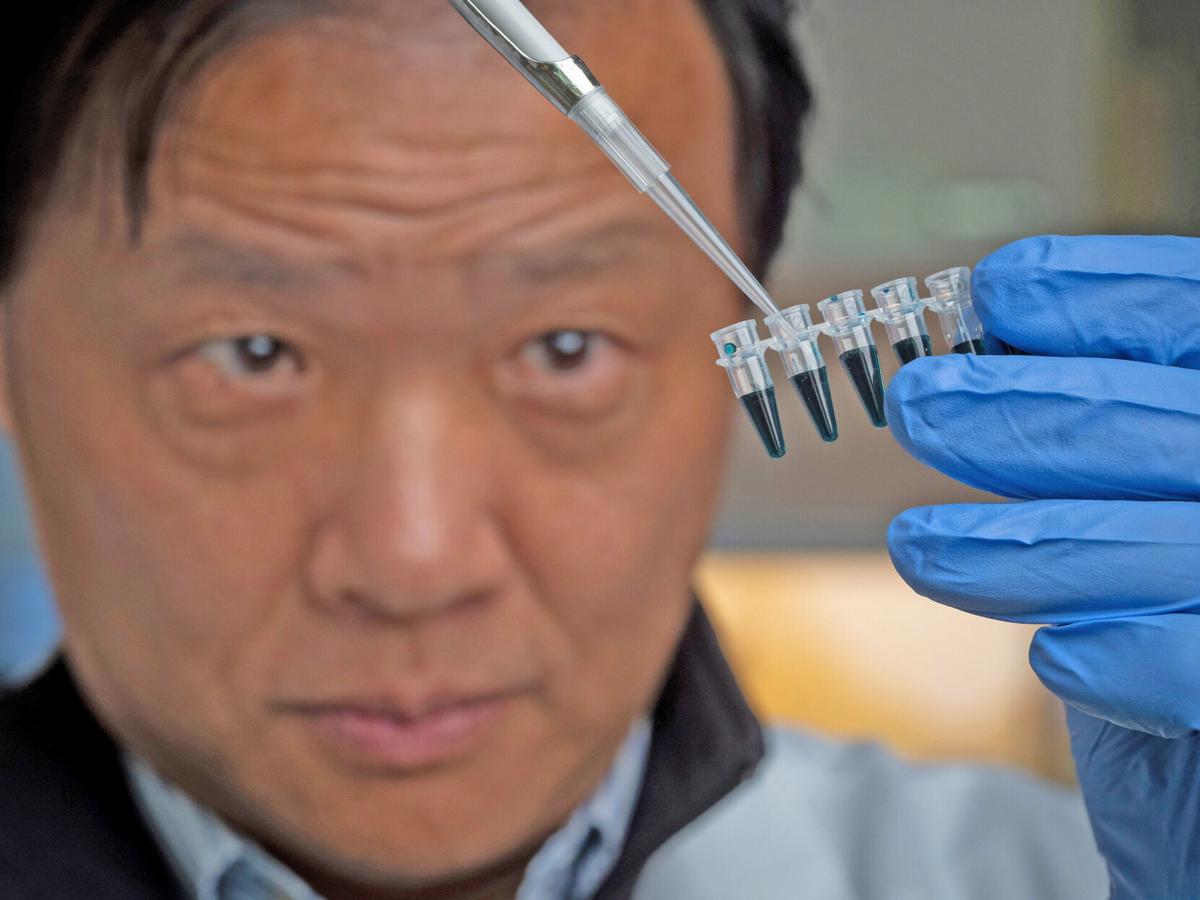 Working in his lab at Oklahoma State University, Liuling Yan has identified a three-gene sequence responsible for conferring rust resistance in wheat, as well as the key genes that control timing of the plant’s flowering. (Todd Johnson / OSU)

Research geneticist Xiangyang Xu studies how wheat specimens respond to a greenbug infestation at the USDA-ARS Wheat, Peanut and Field Crops Research Unit in Stillwater. Comparing observational results in the nursery with unique patterns in the genetic code allows him to speed up the process of introducing insect and disease resistance into existing breeding lines. (USDA-ARS Photo)

Working in his lab at Oklahoma State University, Liuling Yan has identified a three-gene sequence responsible for conferring rust resistance in wheat, as well as the key genes that control timing of the plant’s flowering. (Todd Johnson / OSU)

Developing wheat varieties that flourish in the field while delivering value to consumers is a team effort that involves 10 different federal and state researchers and extension educators working collaboratively at Oklahoma State University.

The faces of many of these specialists are familiar to farmers, who interact with them at field days and production meetings for recommendations on everything from crop fertility to weed, insect and disease management.

But some equally important members of the team remain largely behind the scenes, working in the greenhouses and laboratories to identify improved characteristics.

Xiangyang Xu is a research geneticist with USDA’s ARS Wheat, Peanut and Field Crops Research Unit, based in Stillwater. He scours national and international gene banks for old varieties or wild wheat relatives and then grows them out in the nursery for the purpose of introducing new disease and insect resistant genes into regionally adapted, high-performing lines already popular with producers. This typically takes three or four generations of repeated backcrossing.

What distinguishes Xu’s approach from traditional plant breeding is the use of genetic screening with molecular markers.

To create these markers, Xu collects plant tissue samples, extracts DNA and analyzes it using an automated machine roughly the size of a toaster oven. Combining this information with field observations aids him in finding new sources for crossing purposes and confirming their introduction into existing lines.

“These new lines still have to prove themselves in the field, but the time it takes to get to that point is shortened by using genetic screening,” observes Kelly Chamberlin, a fellow geneticist who directs the lab in Stillwater. “That’s important to farmers, who are struggling every year to make a crop.”

New pests, pathogens and diseases are constantly evolving, along with environmental stress factors, such as drought.

Rust, a common fungal disease, is a prime example. Varieties lose resistance to the pathogen over time as new genetic strains emerge. Xu’s ability to discover new genes for resistance, and combine them with existing ones, creates more lasting durability.

“One gene alone can afford improved resistance, but when ‘pyramided’ (or stacked) with other resistant genes, we can get to where there’s virtually no leaf rust occurring in the crop for years to come,” Chamberlin said.

Xu was born in a rural area of Henan Province of central China. He recalls that when he was a child, crop yields were so low people had trouble producing enough food to feed themselves. That motivated him to attend the nearby agricultural university and become a wheat breeder, a job he held for the next ten years.

He then spent a year as a visiting scholar at the International Maize and Wheat Improvement Center, headquartered in Mexico, where he learned about marker-assisted selection. Recognizing the value of this new technology, he decided to pursue further graduate work and chose Oklahoma State, which appealed to him as a top program with a reputation for continuously introducing new varieties.

That eventually led to his current position with the ARS lab. In his seven years there, he has identified five genes for resistance that have been widely shared within the wheat breeding community and is currently working on a stripe rust project that will soon yield additional insights.

“Dr. Xu is an outstanding scientist, one of the best in the world, and we are very fortunate to have him here in Oklahoma,” Chamberlin said.

OSU’s chief wheat breeder Brett Carver evaluates 300,000 separate data points before releasing a new variety, an exhaustive and meticulous list that includes everything from the maturity pattern across a plant’s life cycle to height and kernel size to milling and baking properties.

Selecting for the rate at which the plant matures is one attribute alone that has a huge economic impact in the Southern Plains. Delaying maturity allows farmers to graze wheat longer before removing cattle and still produce a summer grain crop. According to agronomists, one extra week of grazing generates an additional $4 to $8 per acre.

Figuring out key genes that influence when flowering occurs has been no small task.

“A trait might seem to be linked to more than 100 DNA sequences in the genome, but not all of those sequences actually affect the trait,” Carver explains. “Gene mapping helps us figure out what the relevant sequences are and where they occur in the genome.”

Liuling Yan, who holds the prestigious Dillon and Lois Hodges professorship in molecular genetics at OSU, has spent more than a decade working closely with Carver to pinpoint four genes responsible for flowering time in winter wheat. A research paper about the project was recently published in the international science journal, Nature Communications.

For Yan, coming to OSU in 2006 enabled him to fulfill a dream of running his own laboratory. But his career began much earlier in his native China, where he initially studied plant physiology.

“While analyzing research data from the field, I was intrigued by the large genetically controlled variances in phenotype (or physical appearance) between the many different types of wheat,” he recalls. “I decided to pursue the many questions I had about it.”

He moved to Australia to study, first at Melbourne University and then Victoria University, before eventually coming to the U.S. as a postdoctoral fellow working with legendary geneticist Jorge Dubcovsky at the University of California-Davis.

Internationally Yan is recognized for discovering that rust resistance is determined by a three-gene sequence, rather than a single gene, an important finding now being deployed in breeding programs around the world.

He takes equal satisfaction from having contributed to the release of 19 varieties, earning industry and academic awards.

“Throughout my career, I chose to work with wheat and have built a research program around the crop that I love,” he said.

As Carver notes, “Dr. Yan could have worked with other crops that produced more grant funding opportunities, but he chose to devote his career to wheat, providing a tremendous benefit to our industry.”

In the future, genetic screening will continue to help uncover new traits related to grain quality and nutrition, which according to Carver could have public health benefits.

“That’s the kind of exciting innovation we want to be part of,” he said. “It’s not just about increasing yield. It’s about food; it’s about something that goes on somebody’s dinner table. That’s the total package we are breeding for here at OSU.”

Krebs is an Enid freelance writer.

The Service celebrating and honoring the life of Thomas "Tommy" Crawford, 74, of Enid are pending under the direction of Brown-Cummings Funeral Home. Condolences and special memories may be made to the family online at WWW.Brown-Cummings.Com

ENID — Celebration of life service for Richard Leroy Wood will be 10:00 a.m. Wednesday at Anderson-Burris Funeral Home Chapel. Burial will follow in Memorial Park Cemetery. Richard was born 5/28/1932 and passed away on 6/12/2021. www.andersonburris.com