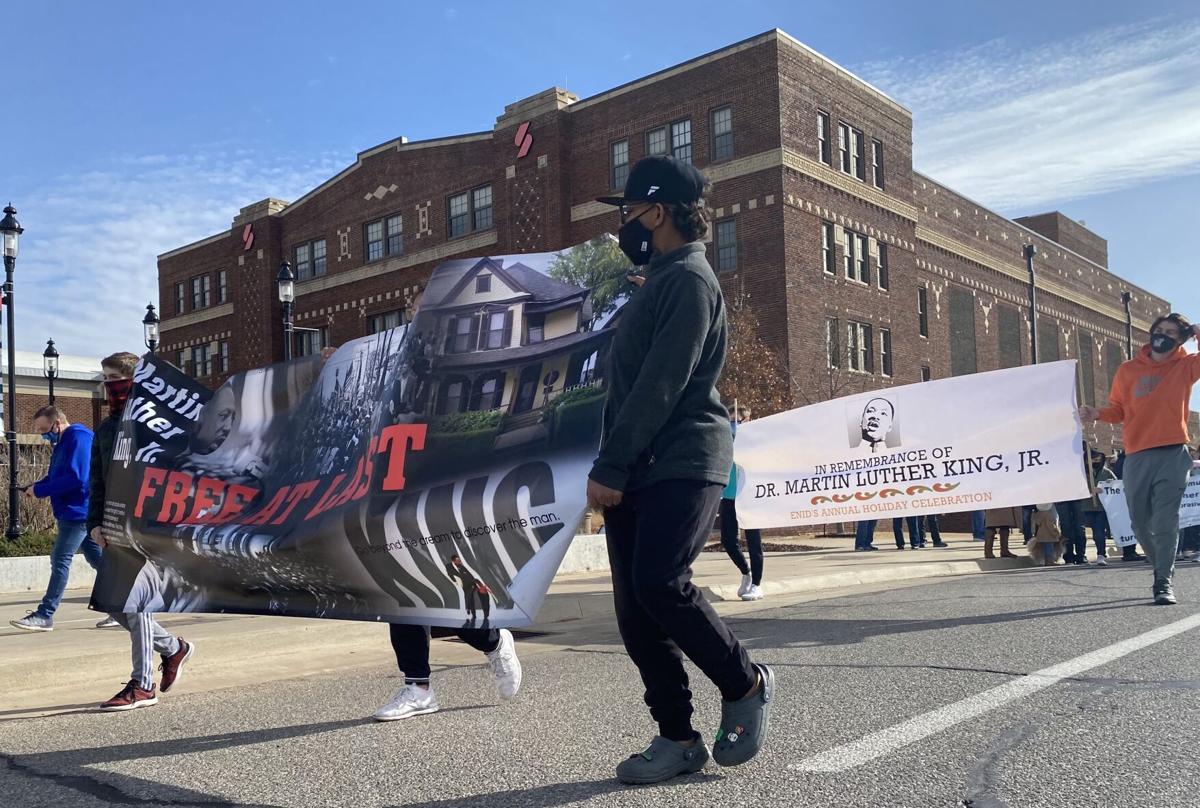 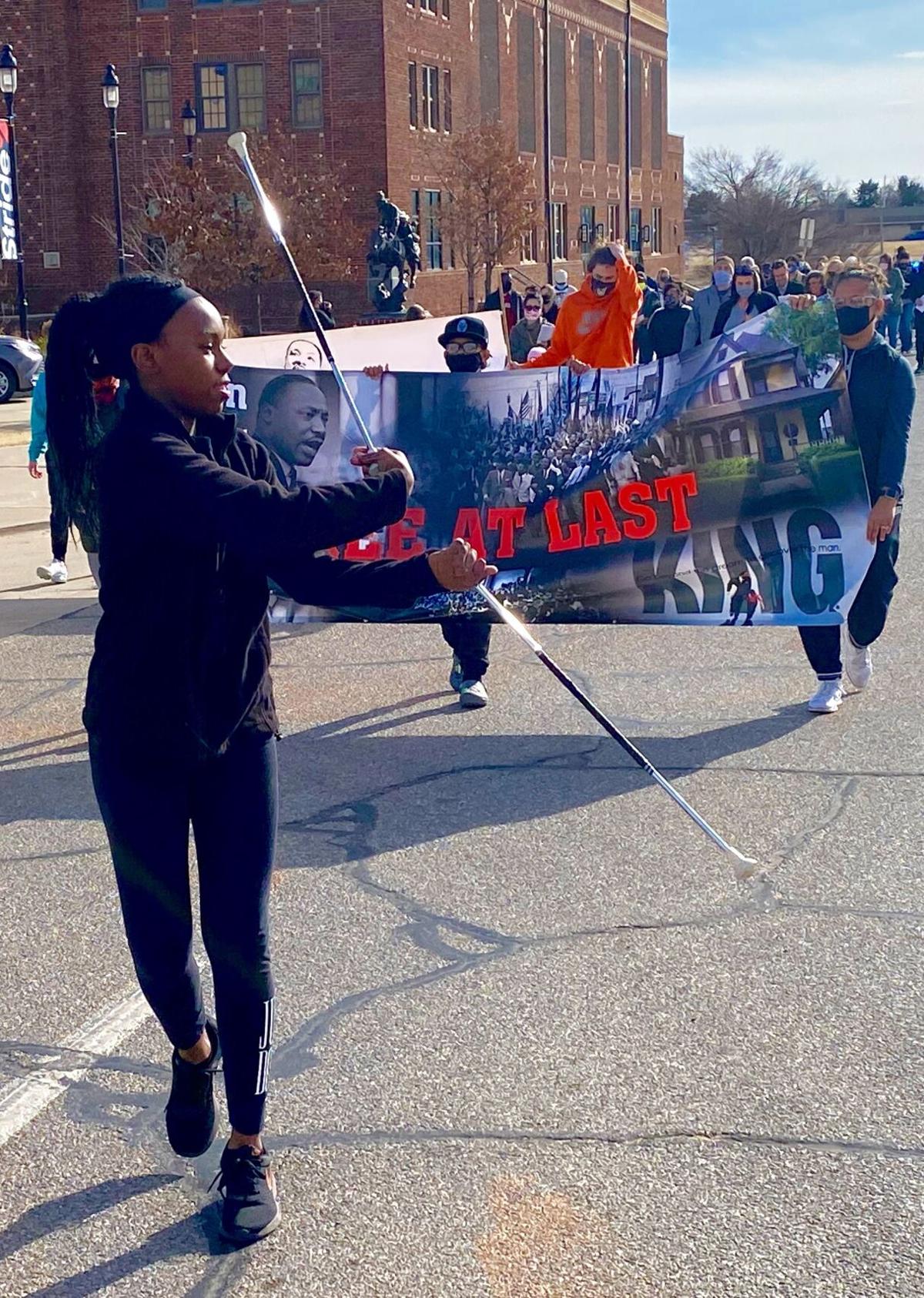 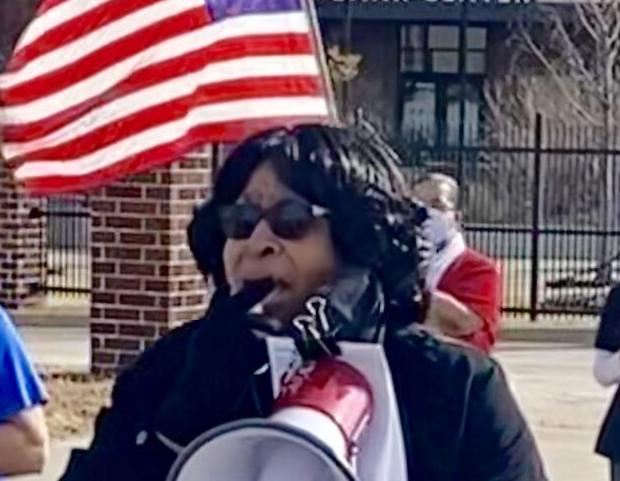 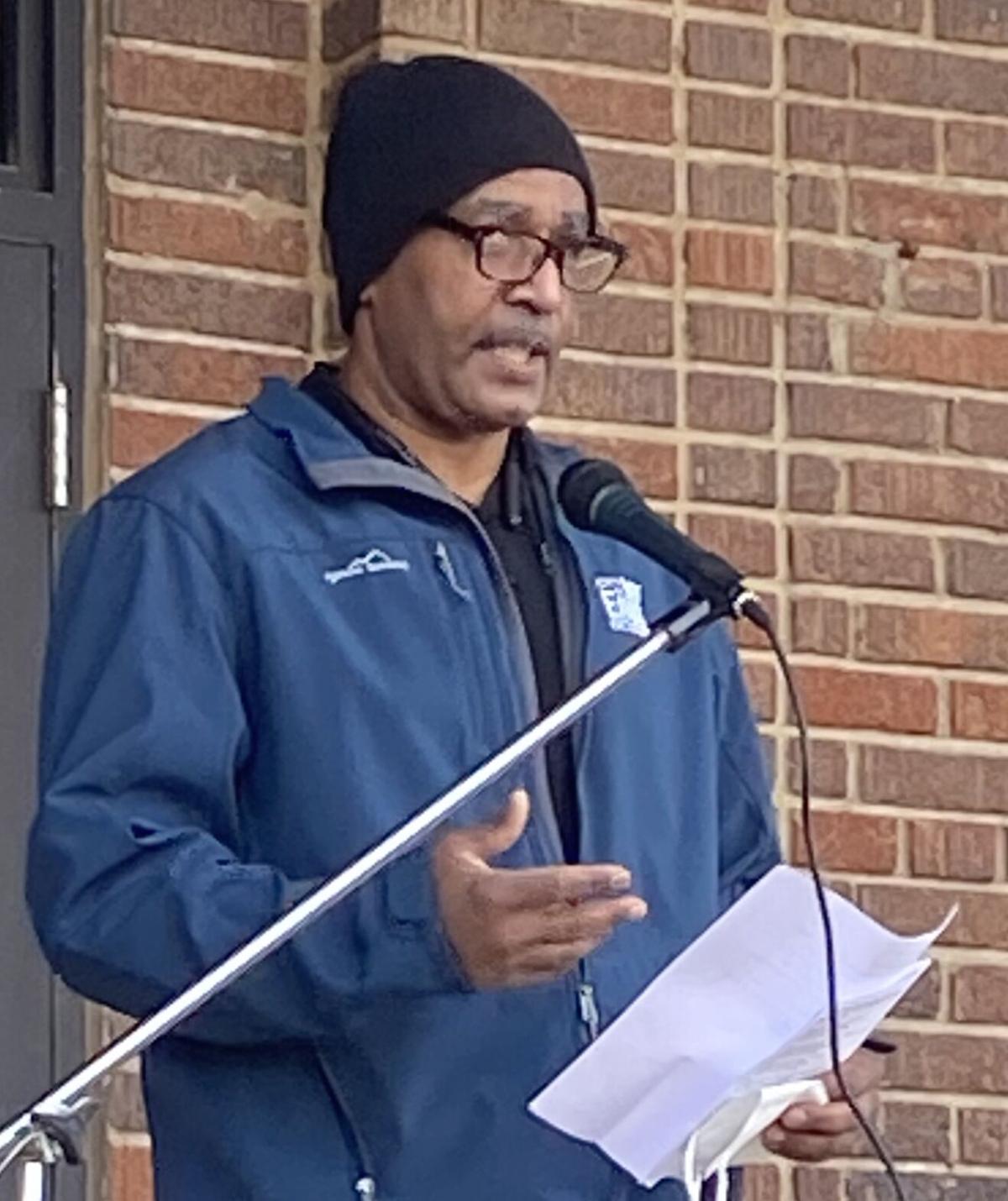 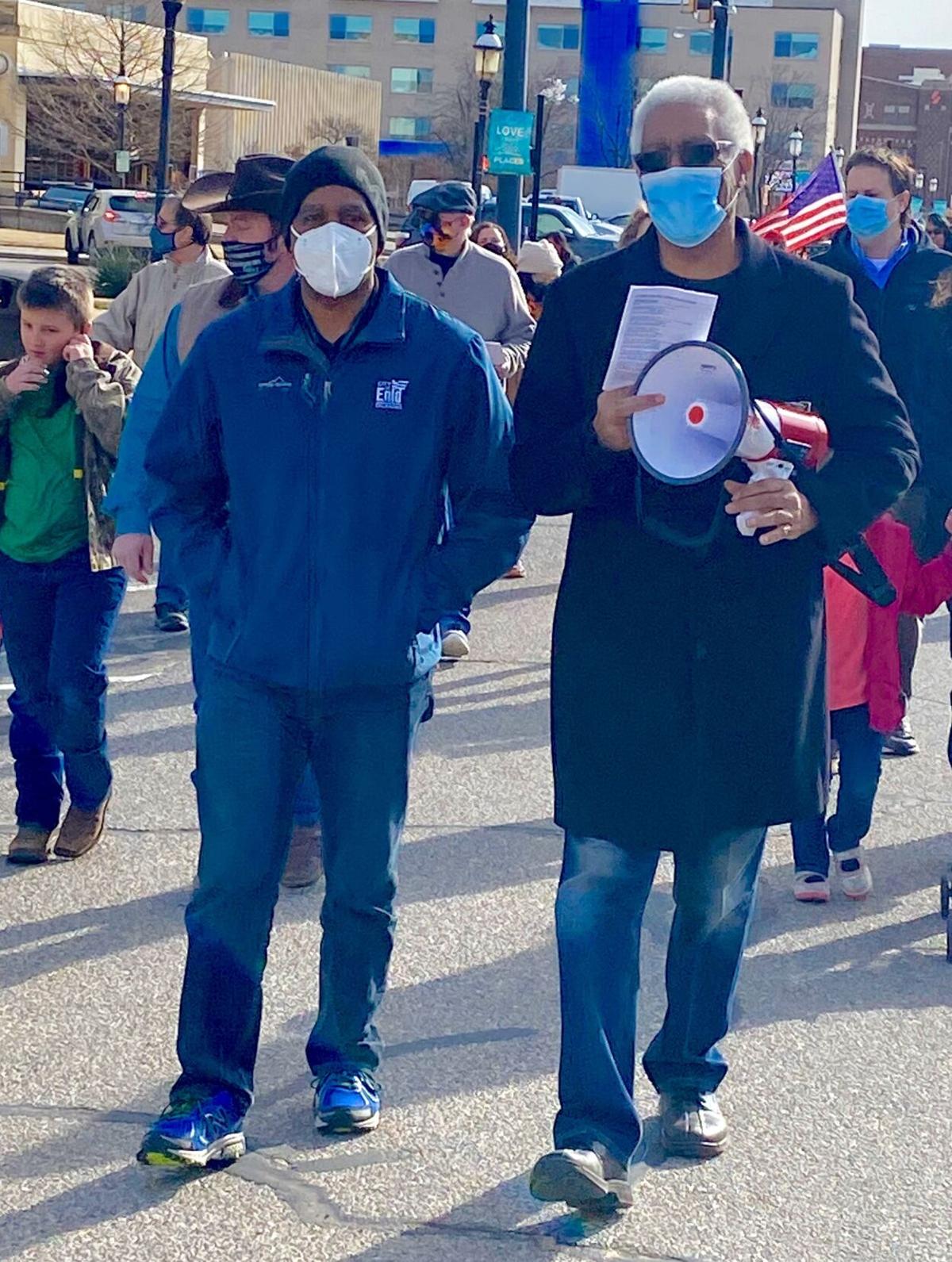 ENID, Okla. — A crowd of about 100 people gathered at Stride Bank Center Saturday, Jan. 16, for the annual Martin Luther King Jr. Commemorative March, to honor and reflect on the legacy of the late civil rights leader.

Plans and the need for the civil rights march were underscored this year by the Jan. 6 insurrection that stormed the U.S. Capitol — a mob inundated with white supremacist symbols and messaging.

Enid Ward 2 Commissioner Derwin Norwood, speaking to the crowd before the march Saturday, said the violence and hatred displayed Jan. 6 are “a wakeup call.”

“I believe God allowed us to see where we really are as a nation,” Norwood said. “We speak of love — we talk about love — but we need to really learn to love.”

Enid Ward 4 Commissioner Jonathan Waddell said that message of love, espoused by King and reiterated by Norwood at the march, remains a dream unrealized.

“Unfortunately, the hope and the promise and the dream of Dr. King, of people being judged by something beyond the color of their skin — we have a long way to go,” Waddell said.

The great divide between how the nation still sees people based on skin color was displayed during the Capitol siege, Waddell said, in how little force was used against white insurrectionists who tried to unseat the government.

Waddell called on leaders of faith to help overcome the racism displayed during the Capitol siege.

“You judge a thing by its fruit. Well, America what is your fruit? Right now I see people storming the Capitol saying I should be back in chains. We are based on our fruit ... and our fruit is this — this is what we are,” he said, referring to the violence of the Capitol assault. “If you are a professed Christian and you are in a leadership position in our community, you have every obligation, every responsibility to use the tools at your disposal to help the people around you.”

Waddell said Black Americans have long known the hatred displayed at the Capitol on Jan. 6 was real and present. For real change to happen, Waddell said white Americans will have to come to that same realization.

“Until white people own this struggle and the change that needs to take place, until they own it as much as any Black person, the change won’t happen — any change will be superficial,” Waddell said.

Terrence Cooper, an administrator with Oklahoma Black Lives Matter, said the assault on the Capitol, with its overt white supremacist messaging, was “shocking but not surprising.”

“White supremacy and racism is embedded in the moral fiber of the creation of this country,” Cooper said. “Protest is also a part of the moral makeup of America — it is America. Racism and protest — America is founded on those two principles.”

Cooper said it’s been particularly frustrating, in the wake of the Capitol attack, to see politicians and members of the community make excuses for the attackers by making comparisons to protests and violence in the wake of the death of George Floyd and Breonna Taylor at the hands of police last summer.

While the Capitol assault aimed to unseat the Constitutional government, Cooper said the Black Lives Matter (BLM) movement “was put together for social change and awareness and to bring awareness to social justice.

Cooper acknowledged vandalism and other crimes followed after some peaceful BLM protests last summer, but said that was not orchestrated by, nor was it the goal of, BLM. The goal, he said, was to raise awareness of the same unequal treatment between whites and Black Americans shown at the Capitol last week.

An analysis of more than 7,750 demonstrations in 2,400 locations across the country found that 93% happened with no violence, according to the Crisis Monitor report, as published by the Associated Press.

Cooper said violence and lawlessness are not acceptable, and urged politicians and the general public to check facts on the BLM movement and its goals.

“They need to educate themselves before they make an opinion on the BLM movement, and make sure that opinion is an informed opinion, and if they have questions, ask,” Cooper said. “We are definitely not about violence. Our mission is in alignment with Dr. King’s ideology — we want peace and harmony. That is what the BLM movement is all about.”

The upshot of the recent violence, if there is an upshot, is the greater awareness it’s yielded of endemic racism and inequality, Cooper said.

“I am happy to see we are finally being able to have a real conversation, a real talk, because as Americans we really and truly have some things we need to iron out,” Cooper said. “We are talking about an American philosophy and behavior — of white supremacy — that has been here since we settled here, and since the founding of our nation. We’re still talking about race in 2021, but at least now we are able to have that conversation.”

Cooper said white Americans of today are not to blame for the misdeeds of the past. But, he said, all Americans — of all colors — need to look honestly at the vestiges of slavery and segregation, and how that history still shapes America today.

“The biggest hypocrisy of all is not being able to admit it,” Cooper said. “America needs to keep its promise to the people it enslaved and treated so poorly — extend the olive branch to fix it. You know it happened. Let’s have a real conversation. Let’s put our heads together and fix it, and untie the hands of the politicians who are willing to do it.”

Referring to the violence at the Capitol, she said the “Black community has known this was happening — because it never stopped.”

While some make excuses for the white supremacist symbols displayed during the Capitol siege, she said there’s no doubt about their meaning in the Black community.

Two years ago, a white man driving a pickup truck flying a Confederate flag pulled up beside Norwood in traffic, in Enid. He rolled down his window and screamed at her: “N-word, go home — go back to Africa.”

When the Confederate flag flew inside the Capitol rotunda, Norwood said that was the meaning — hatred and violence.

“You would be surprised how often those things happen,” she said. “The NAACP is about bringing unity. We are about bringing social justice, but I shouldn’t have to feel cautious going outside or driving my car.”

Reflecting on King’s message, and the hatred that led to his assassination in 1968, Norwood said “a lot hasn’t changed.”

“I think we have digressed from where we were a few years back, because the racism is much more open now,” she said. “We’re still fighting for equality. It’s better in some aspects than it was in 1968, but in some ways it’s more overt now. We’ve gone backwards toward the 1950s and 1960s.”

The Rev. Milton Mitchell, NAACP member and a former candidate for Enid mayor, said the Capitol attack represents how much things have gone backward in race relations in recent years.

Born in 1951 and raised in Enid, Mitchell is no stranger to race-based hatred and violence.

As a teenager, Mitchell would walk from Emerson Junior High School to work at the Tiajuana Restaurant, which then sat at Grand and Willow. Walking to and from work, Mitchell said he faced a constant harangue of racial epithets and threats, from the doors of the many bars that then lined Grand.

“I’d pass by those places, and people would holler out the door and come out and yell ‘Hey little N-word, where you going?’ The thing you had to do was just keep your eyes down and keep going,” Mitchell said. “And five nights a week you had to do that — scared, but just glad to be working.”

More than 50 years later, when Mitchell ran for mayor, he said he received death threats, because he was a Black man running for office in Enid. Now, he sees that hatred coming back out of the shadows.

“When I think about progress, that was a time when it as overt, and then it went covert for a long time, and now it seems to be more overt — maybe not as much as when I was a kid ... but when I think about these situations we have today, it’s scary to be out walking or jogging,” Mitchell said.

But, what scares him more, is the threat racism poses to peace and true unity.

“I am praying for our country, and it’s going to be a hard road, but if our nation doesn’t come together we’re going to be in real trouble,” he said. “And in some ways, that is scarier than when I was a boy.”

There’s only one remedy for hatred, Mitchell said — love.

“Scripture talks about how you can’t love God and not love the people you’re around every day. Every person is your brother or your sister. If we’re going to progress that’s what we have to do,” he said. “That’s not something any law can do. That’s a heart thing. It’s a spiritual thing.”

While the term ‘radical’ has negative connotations today, Mitchell said radicals are needed to face down racism and hatred.

Derwin Norwood, in his remarks before the march, echoed that sentiment.

“If we learned to love the way Christ ordained us to love, the world would be a much better place,” he said.

In spite of the violence in the Capitol, and the threat of more violence from armed militias, Lanita Norwood said she still has hope for King’s dreams to be realized.

“We are better than we were, but we still have mountains that we are determined to climb,” she said. “Failure is not an option when it comes to unity in our community.”