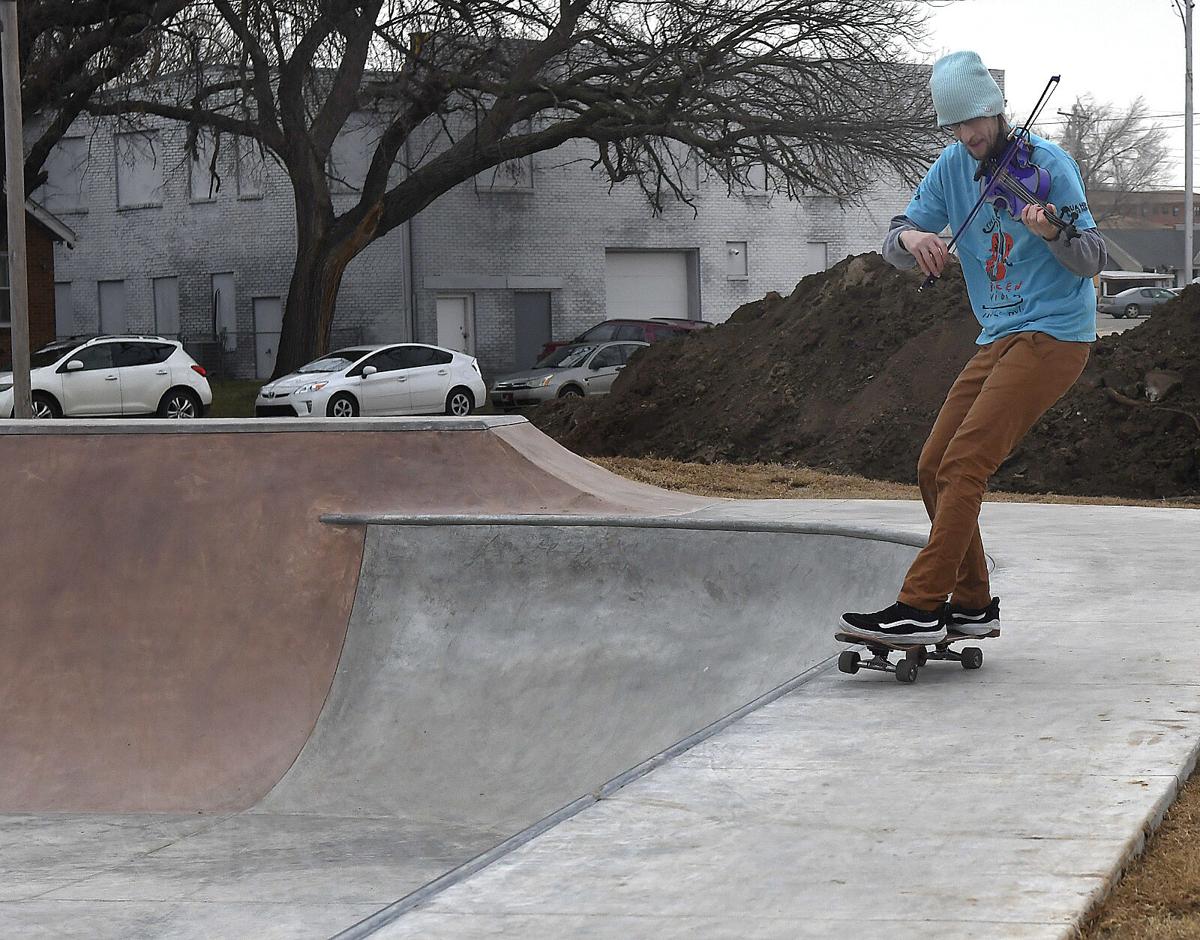 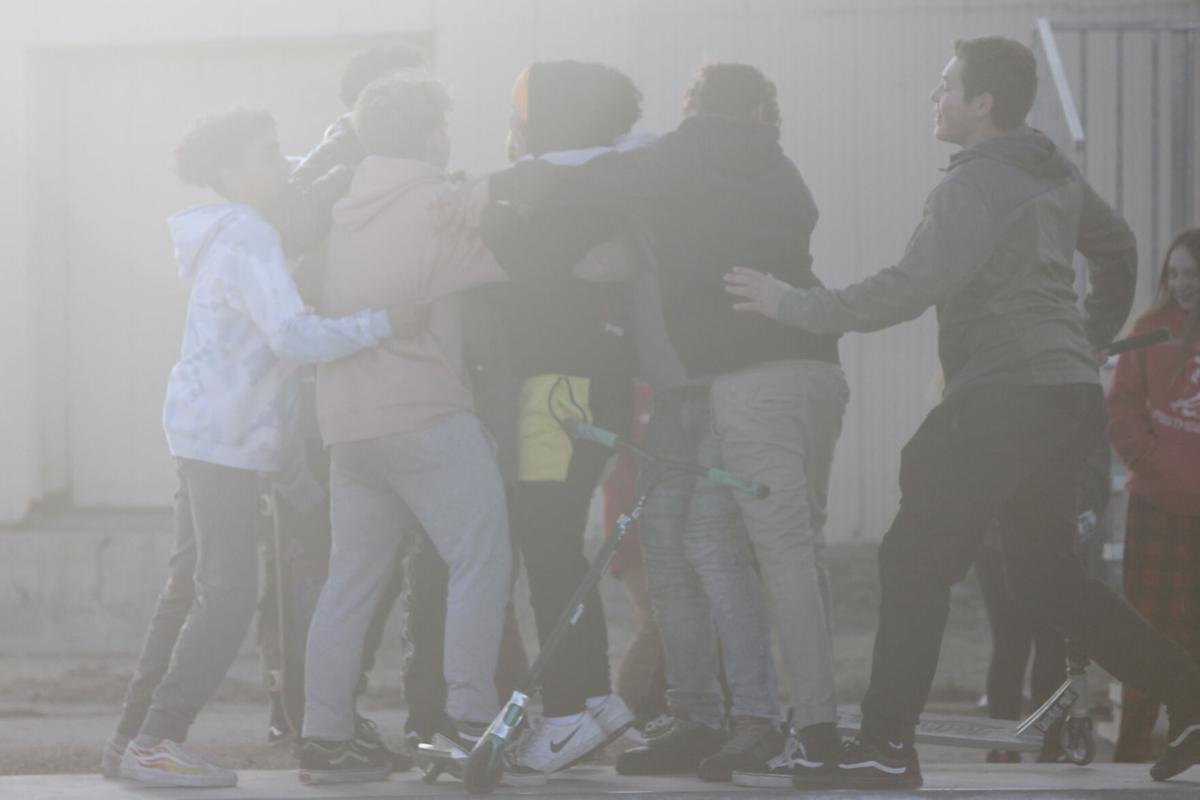 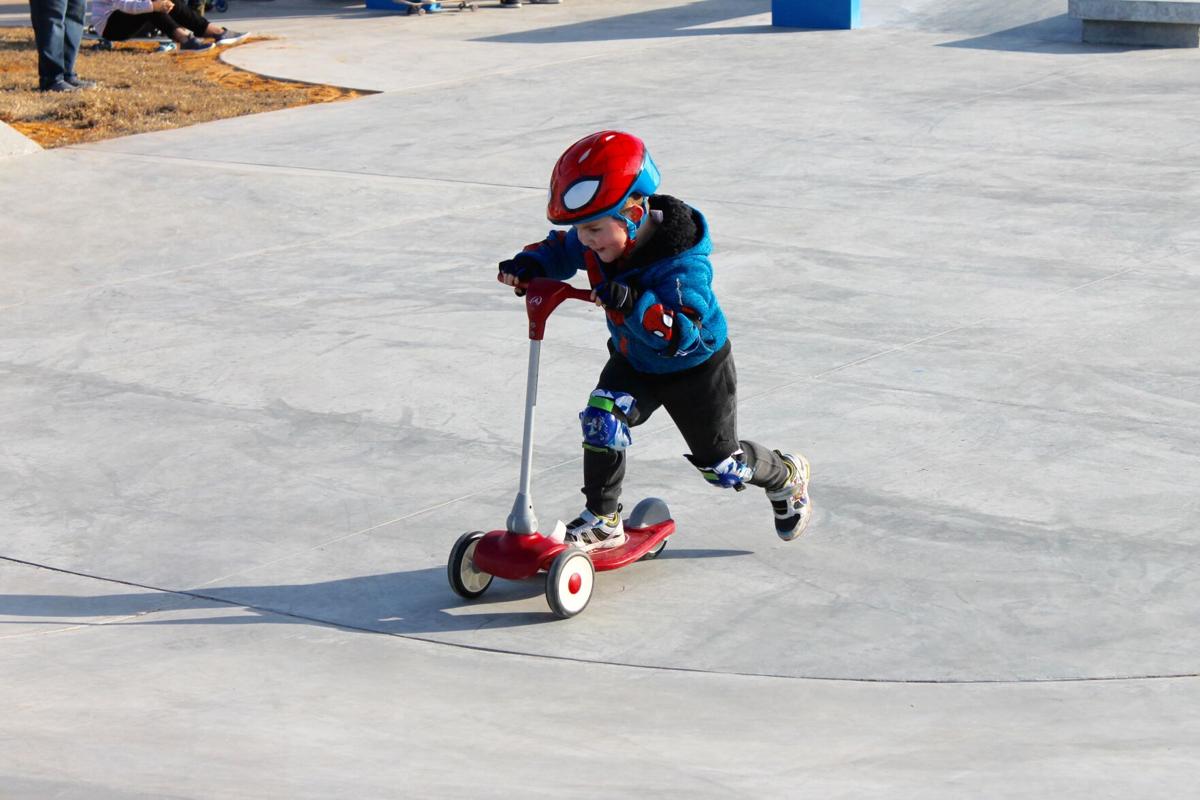 ENID, Okla. — Around a hundred people — many students just ending their first week back at school — braved the January cold Friday afternoon to practice their skills and tricks at Enid’s new skate park.

Drama abounded during the scooter and skateboard competitions, held after the 16,000-square-foot park’s morning ribbon-cutting on the corner of Randolph and 5th.

During their 60 seconds to wow the judges, some skaters soared above the ramps in long-practiced tricks, while others crashed into the concrete below, undone by simple gravity and missed timing.

One scooter-rider landed on his side after tumbling off a pipe and crawled off until he was able to stand again. A skateboarder later fell onto his knee and was unable to stand or walk at first. Several guys carried the teen from under his legs to the bleachers.

Some skaters, seemingly disheartened after a fall or stumble, would just keep skating back and forth for the rest of their one minute, while others walked off the floor altogether.

Emcee Joseph Beserra, of Exist Rocks, would choose a new song for each competitor, while crowds watched and cheered the physical, sometimes-aerial spectacles from the newly added bleachers and along the sides of the park’s concrete edges.

First in a three-way, 30-second round, each skater had to do their best trick. Parker, coming off a funbox, pulled off a triplewhip — spinning the deck of the scooter around the handlebars three times while mid-air.

In the second face-off, Parker and second-placer Jared Comins started on opposite ends of the park. Parker board-slid and then tail-whipped off a rail, and the surrounding crowd of skaters and spectators alike went wild.

Parker, now a Waukomis High School junior, said since getting into skating four years ago, the biggest trick he’s learned is patience.

Last summer, he drove to the old park every day to practice on his scooter, and now has come to this one every day since it opened to the public last month.

While the park opened up to a free skate before the skateboard portion of the competition, Parker left to go get Fanta and a pack of Skittles at a gas station down the street.

As the skateboarding neared its end, Parker stood by the bleachers, clutching his snacks and shivering ever so slightly from the cooling temperatures. He was only wearing a pink hoodie, so he’d also bought a T-shirt from the Exist Rocks merch table.

“Once I get to riding, though, my blood starts pumping and I just get warm pretty quick,” he said. “I just focused on trying to get my tricks so I could win.”

He got his scooter a week ago, so once the winners were awarded their prizes (two skateboards and a scooter donated by The Bike Shop) Parker gave his Street Surfing scooter to Luke, a younger boy wearing a Spider-Man helmet who also competed in the scooter competition.

Parker said he couldn’t have done this without his family, who’d bought his scooters, stickers, grip tape and wheels, and would drive him to the old park — so Parker said he wanted to pay that forward for other kids.

“I’m just trying to help the younger kids, so their parents don’t have to spend a whole bunch of money on a scooter,” he said.

Earlier Friday morning, as temperatures were closer to freezing, Mayor George Pankonin — wearing his own pair of roller skates that looked like they came from a roller rink — said the park would be “the envy of communities throughout Northwest Oklahoma.”

Enid native Kyle Dillingham then christened the park with the first skate, playing a purple violin as he looped from one end of the park to the other half a dozen times on his sticker-covered skateboard.

He said he didn’t know of anything he’d spent more time and dedication on than both hobbies.

“I just used to close my eyes and dream about this,” he told those who came to the morning’s ribbon-cutting ceremony. “For 30 years or more, I’ve been waiting for this day, and it’s a really special thing the leadership of Enid has done for the youth of our city.”

He said Enid’s skate community is a truly special one because everyone is welcome at the park.

“Everybody has a place on this park,” Dillingham said.

We like how this all came together, and we like that city officials sought input from local skaters — the ones who are going to be using the park the most.

'The sky's the limit' with new skate park, set to officially open Friday

The grand opening, set for 3:30 p.m., will consist of a clinic on basic skateboarding techniques, a skate competition game and giveaways.

FAIRVIEW - Funeral services for Paul David Worley, 62, will be 1:30, Saturday, January 23, 2021, at the Fairview First Baptist Church with burial in the Fairview Cemetery. Arrangements by Fairview Funeral Home Inc.