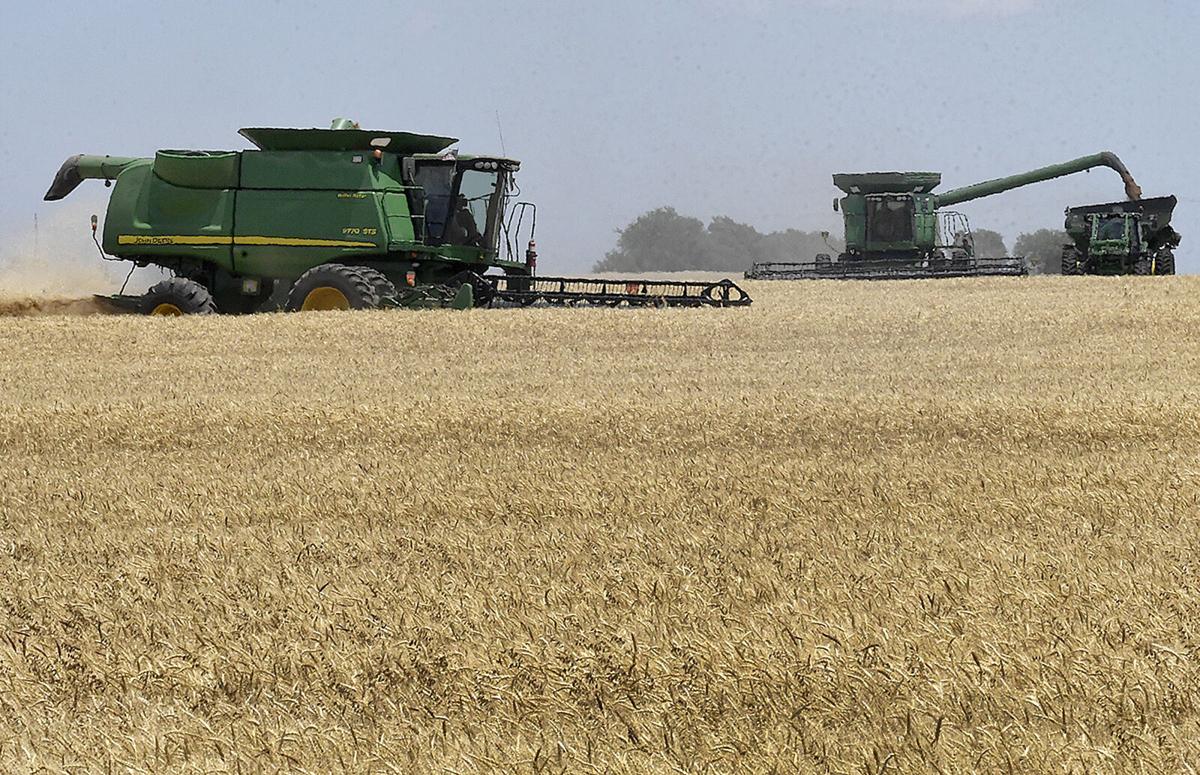 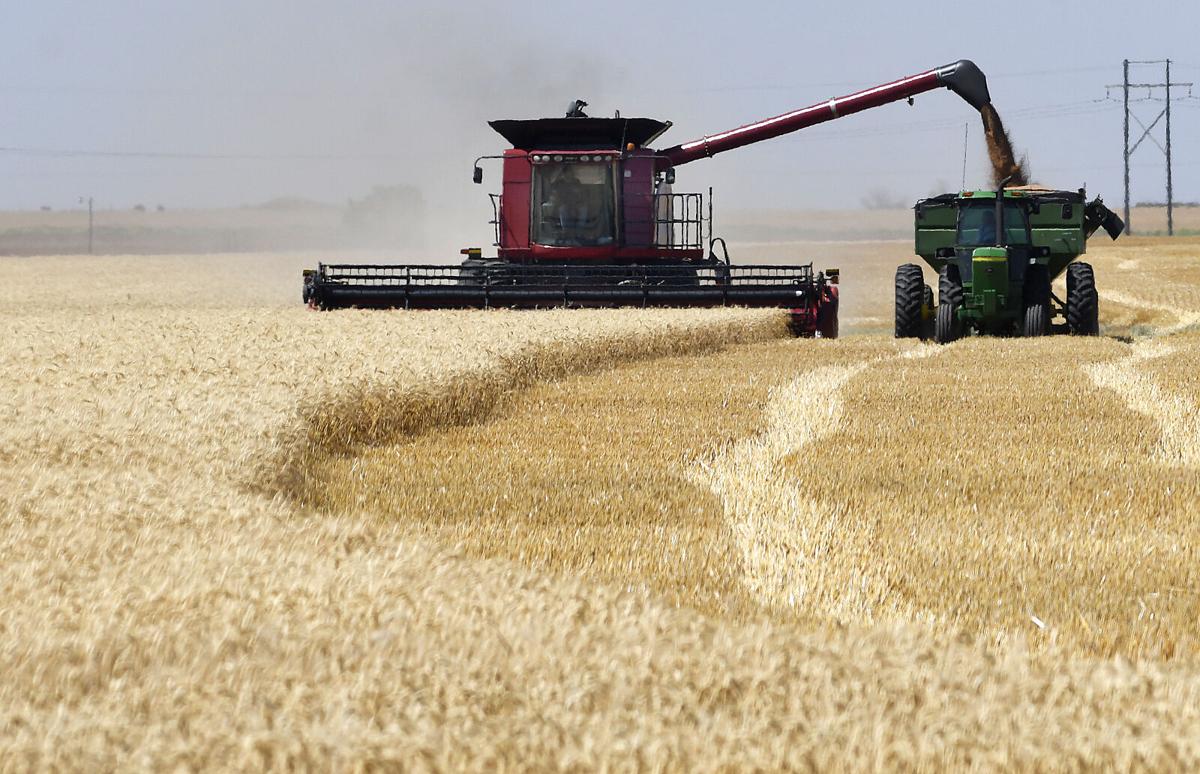 A combine empties its grain bin as it harvests a wheat field on west Craig Road Wednesday, June 17, 2020. 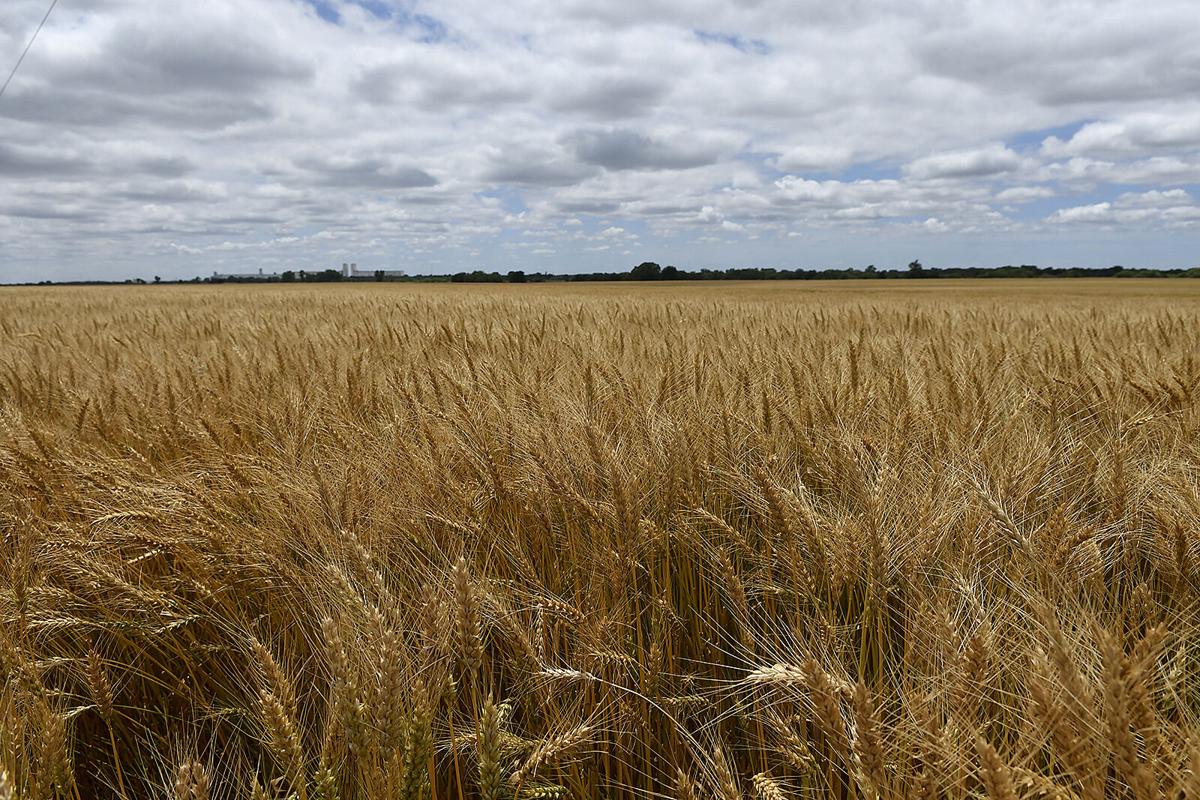 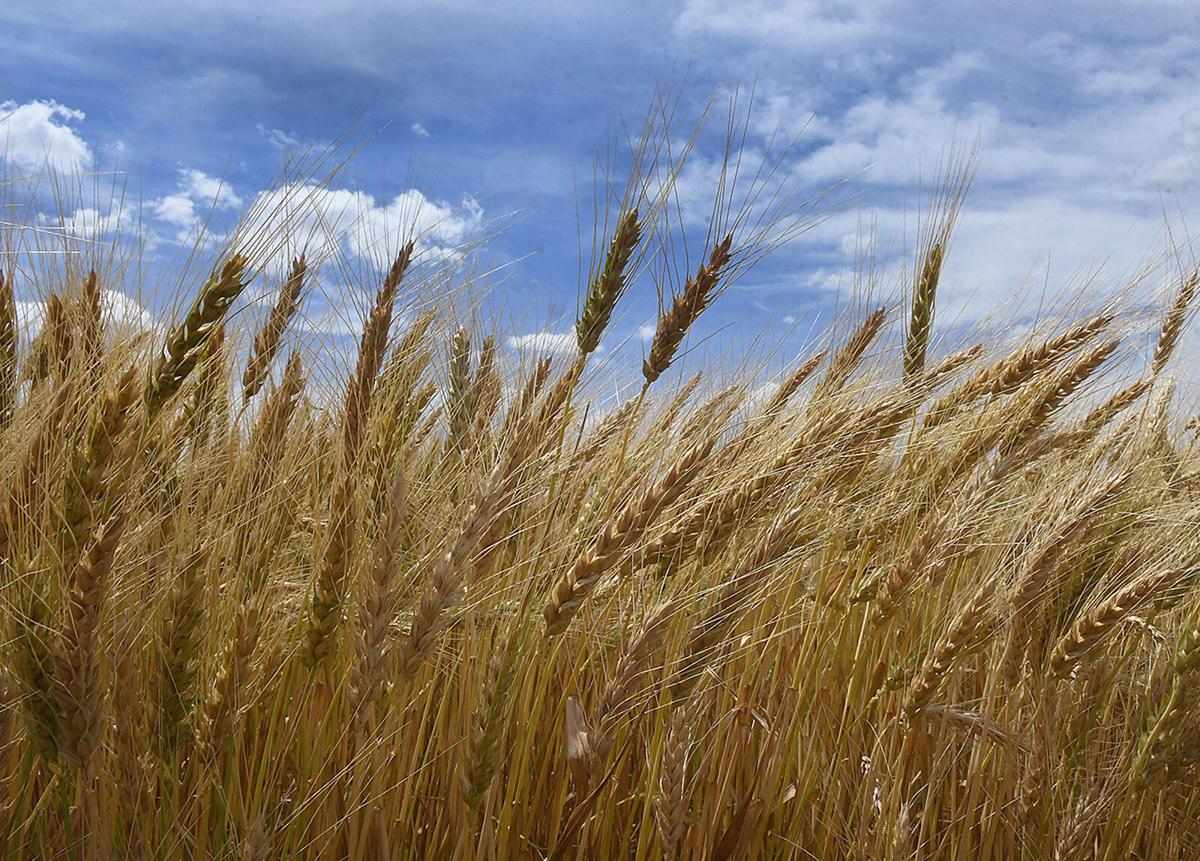 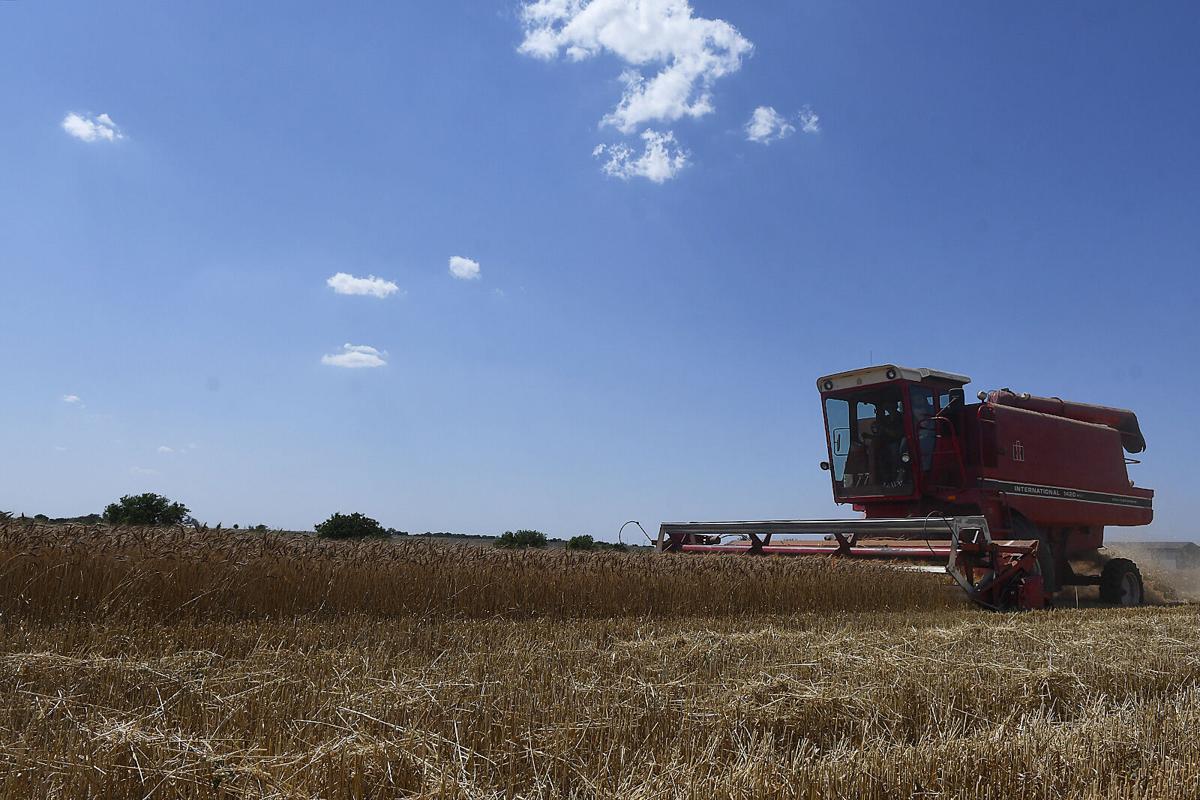 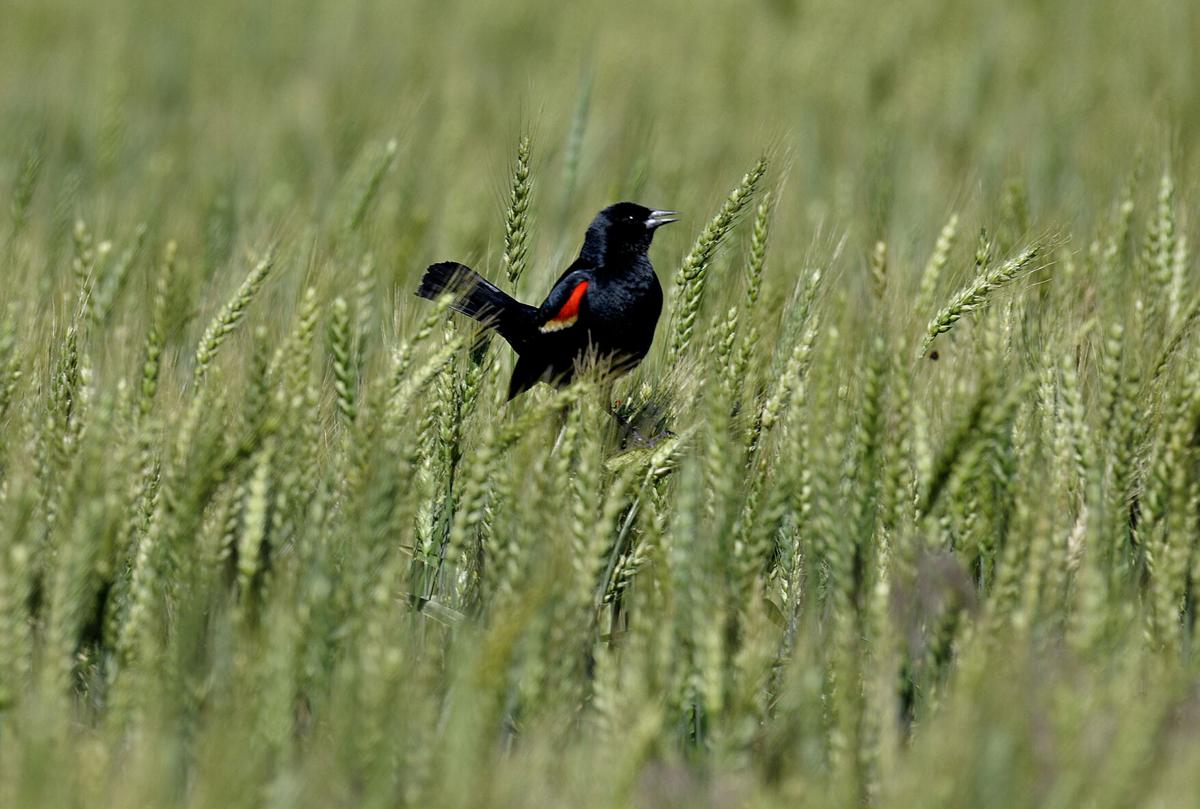 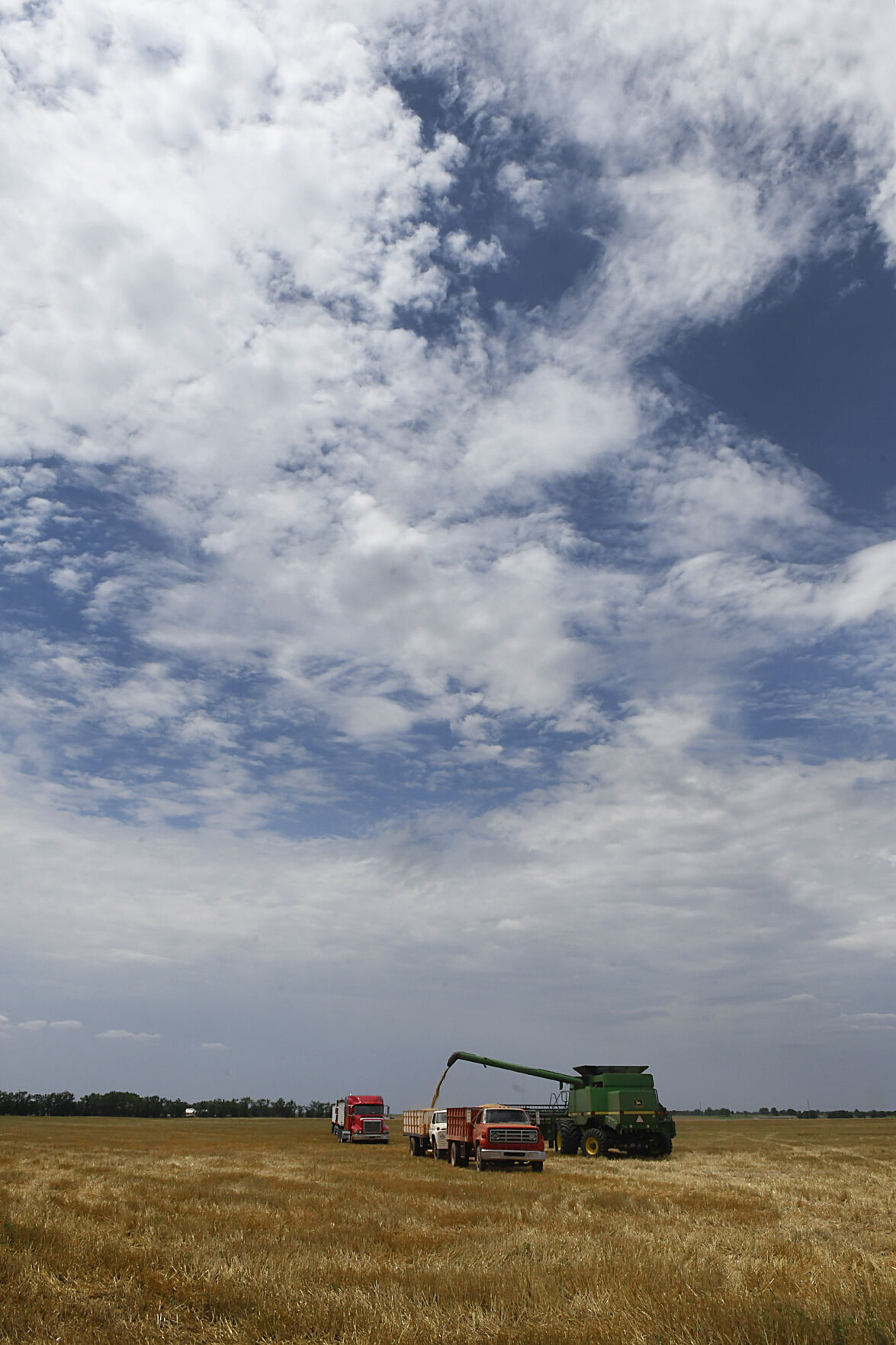 A combine empties grain into a truck in a field on the southwest corner of U.S. 81 and Carrier Road Thursday June 8, 2017. 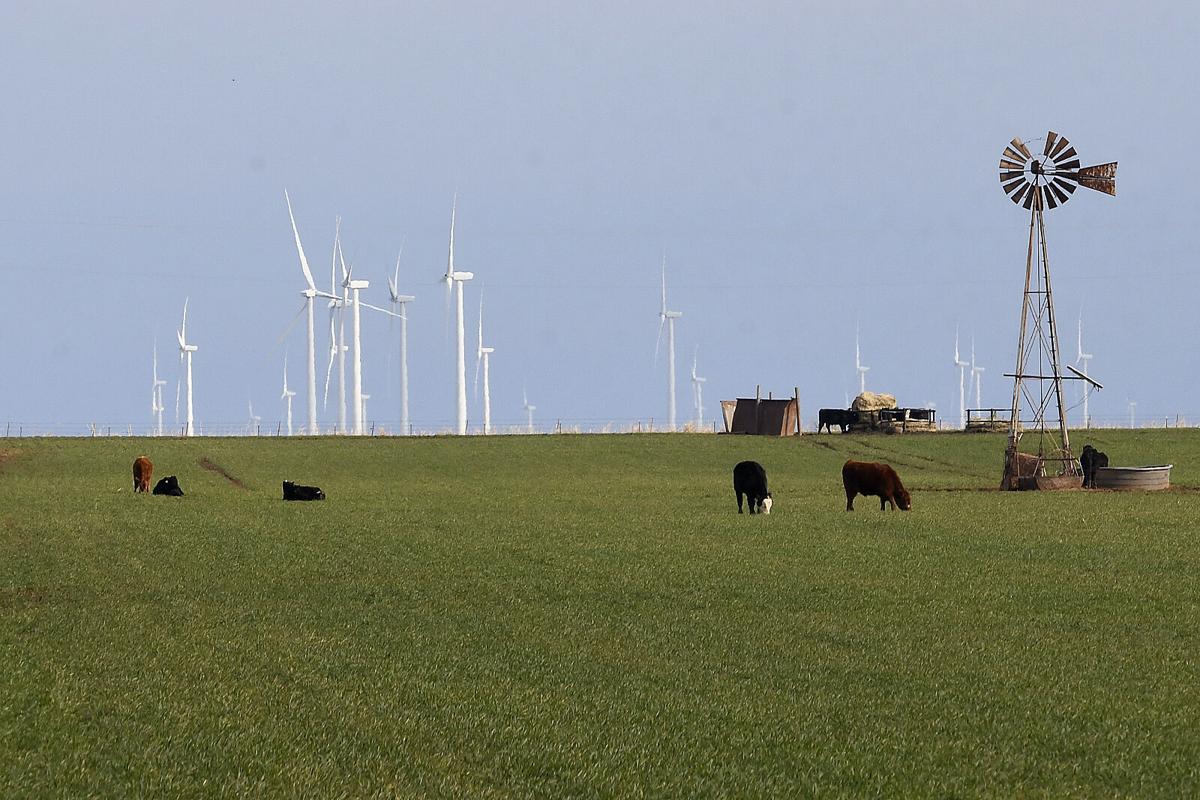 A combine empties its grain bin as it harvests a wheat field on west Craig Road Wednesday, June 17, 2020.

A combine empties grain into a truck in a field on the southwest corner of U.S. 81 and Carrier Road Thursday June 8, 2017.

Wheat prices are going up. The weather has cooperated. So have markets in Russia and China.

“There is a reason that we have planted it for more than 100 years,” said Trent Milacek, northwest area ag economics specialist with the Oklahoma State University Cooperative Extension Service. “It has really worked well here.”

Low prices in past years have often made it better for producers to grow wheat and graze wheat with cattle.

“It’s been a very good staple for our producers since the Land Run (of 1893),” Milacek said. “Producers are going to continue to go back to that. It’s what we’re the best at in this area.

“Things have gotten better in terms of price,” he said. “We have seen a large increase in this area. It’s coming back down a little bit recently so that is something for producers to watch.”

He added there has been talk of needing price protection.

“But it still looks good,” Milacek said. “You have a hard time building a budget for any crop that we produce around here, but prices have come up enough where we can be competitive now.”

The one current negative might be the price of natural gas where producers get their nitrogen yields. That affects how wheat will be fertilized for the last time in the spring.

“It will affect crop budgets a little bit,” Milacek said. “I don’t know if that will hold up. It’s up in the air for the moment what’s going to happen. That wheat prices jump comes from all this good rain. We have gotten quite a bit of that. I’m quite a bit optimistic about the South Plains wheat crops. Looking at what kind of yields we will get out of that is going to negatively affect prices. There’s always a double-edge sword. If you have good prospects for higher yields, expect prices to come down because of that.”

“We haven’t been seeing a lot of disease from the fall to the spring,” he said. “It’s been low on disease and insects. Some guys’ wheat is a little thinner, but we still have good development and good yield potential. We have had some good top dressing application dealing with those February storms.”

Wheat prices rising since the summer 2020 have been attributed by some to Russia, the world’s largest exporter, announcing export taxes on wheat and grain export quotas. The move by Russia to increase supply and reduce prices on its domestic market is set to remove oversupply on the international market, according to various reports.

“That is a story that has been developing for several months now,” Milacek said. “That’s their way of ensuring they can have an ample supply of grain.”

The term food security can be thrown around in several ways, Milacek said.

“You see a lot of importers of grain locking up bigger supplies than they normally would just so they can feel secure in what they need to do to act,” he said. “Trade disruptions ... have had people a little more nervous about ensuring their supply of grain for their countries.”

Milacek hasn’t heard much about the uncertain China markets.

“The biggest market change coming out of China is some of the sanctions people have put on them as far as forced labor,” Milacek said. “I’ve seen cotton exports going to various other countries. I think other crops and grains will eventually make it to China. I haven’t heard a whole lot of change come to China coming along as we were under the previous administration.”

The biggest positive has been the “very drastically” increase in sorghum markets, which are going to definitely affect acres in Oklahoma, Milacek said.

“Prices haven’t been this good for several years,” Milacek said. “A lot of that comes from China buying grain sorghum. They have been having a problem recently securing enough ... That’s one of the reasons for the increase in grain sorghum because it is an alternative to corn where they can use it for animal feeding. Hog herds are in a lot better shape because of the need for more feed grain … that’s one of the main things coming out of China.”

Whether farmers should diversify is a question that is hard to answer, Milacek said. As prices go up, so will wheat acreages. Low prices had been one reason to branch out.

“Once you learn a skill, it’s not a scary anymore,” Milacek said. “I think producers will be more willingly to continue those practices. I imagine we will get to a more normal wheat acreage in Oklahoma, but I always think other crops will always have a place.”

Bushong said increased technology will allow farmers to keep other crops in rotation.

“The scares are still there from past years,” he said. “The morale is better, but we’re still encouraging producers to ... continue to think how they can strengthen their financial position instead of levering things up and making things worst.”

The traditional family farm has had to change over the years, relying more on farm to market, farmers markets and selling beef directly to consumers.

“The market is only strong enough to support more than a few players in any one area,” Milacek said. “It’s more difficult for one individual to succeed in.”

“If you want to go into farming, the best time to start was yesterday,” Bushong said.

Prices have rallied in recent months so Bushong said “acres might pick up again. I know Kansas is going up in acres. North central Oklahoma might be on par with last year or slightly better.”

Cotton has come up in prices similar to soybeans and canola, Milacek said.

“It’s competitive,” Milacek said. “It’s still up in the air because it’s still early, but I would say the price standpoint is as competitive as other crops.”

Milo prices have increased substantially, Milacek said. They were anywhere from a dollar to a dollar and half above corn futures. That lends themselves “to very profitable budgets, even at a modest yield.”

Instead of needing 60 to 70 bushels to break even, producers may need more like 40 to 50 now. It can be produced in both dry and wet conditions.

Corn has been one of the lowest of all crops, Milacek said, adding he doesn’t expect corn “will compete nearly as well when it comes to acres.”

He points out if you can grow corn, you can usually grow milo. On pure price, milo will win out. Corn has the advantage in herbicide technology from a rotation standpoint.

“If you’re looking to get rid of weeds, corn will have a place this summer,” Milacek said, “but if producers can get a substantial contract for milo, it’s hard to see them choosing corn over milo from a price standpoint.”

Soybeans have had a “substantial price increase,” Milacek said. It’s second only to canola in price futures. It’s been up to $14 and is now closer to $12.50 or $13.

“The prices are a lot better than we have had in the past,” Milacek said.

A number of acres were planted last year when prices were at $9. The rains have made soybeans even more favorable.

“I imagine it’s going to win out over a lot of different crops,” Milacek said. “You might see some producers rotating away from the crop due to disease pressure and getting more herbicide options for weeds and things.”

Bushong, who brought canola to the state in 2004, said there might be a slight increase in acreage. He said producers have seen the advantages of having canola as a rotation crop. The biggest challenge has been getting a good price to compete with wheat.

If prices hold, Milacek said, canola can find its way into more fields.

“Local demand has dried up,” Milacek said. “We have had to find different ways to fight the negative of growing canola in Oklahoma.”

There are very good contract prices right now, Milacek said. It does well in both dry and wet conditions. Sesame can be thrown into the mix because it is a low input crop.

The sesame crop in the past has been hurt by worms such as leaf rollers, Bushong said, “but reports from south Texas have said that hasn’t been an issue so far and hopefully won’t be in the future.”

The COVID-19 pandemic had a mixed impact on agriculture, which had an obvious advantage in being an essential industry. Equipment companies were allowed to stay open. Cattle operations were hampered by restrictions in the beef industry. The producer could stay on his tractor.

However, the biggest handicap was the lack of one-on-one communication with agricultural offices.

“Our producers were incredibly resilient, and they have done a great job in putting in the crops and producing the product. It was just more difficult due to those restrictions.”

Those restrictions forced workers in agriculture such as Milacek and Bushong to try and expand through technology. They were involved in more Zoom calls and producing podcasts and videos through Facebook.

Outdoor events had to be limited to 50 people with masks and social distancing. Bushong said they hope to have some wheat field tours in coming months, “but it’s going to look a whole lot different.”

The farmer, unlike other businessmen, may not have an office or conference room to work from. Many were able to use smart phones. Bushong and Milacek urged their clients to “learn to use the tools to get our information.”

“Demographically, the younger ones have adapted better than the older generation,” Bushong said.

“Most of the time a farmer has a job in town or is involved in some type of ag industry,” Milacek said. “If they were in a business that was sales driven, it would affect their pay.”

Education is vital for agriculture’s future, Milacek said. He said it’s rare when one person is making decisions on a large farming operation. He said extension offices like OSU’s or the FHSA are good sources. FHSA has a number of programs for anyone —such as veterans and minorities or new farmers — who is thinking of getting into farming.

Bushong and Milacek both have seen their territories and duties expand as personnel have been cut.

Oklahoma’s ever-changing weather also will always be a challenge.

“A longtime farmer told me that the average rainfall in Oklahoma is 23 inches, and if we get more than half of that by May, expect the second half to be dry,” Milacek said. “Oklahoma is so strange. You can’t get too far ahead of yourself and start counting your chickens before they hatch.”