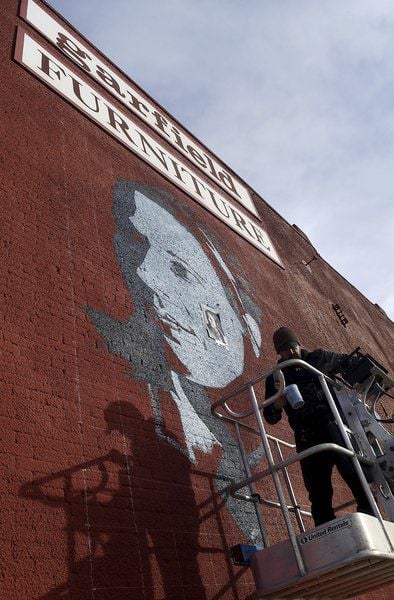 Jake Fowler positions his lift as he paints a portrait of Amanda Brooks on the south side of Garfield Furniture on Wednesday, Nov. 28, 2018. (Bonnie Vculek / Enid News & Eagle) 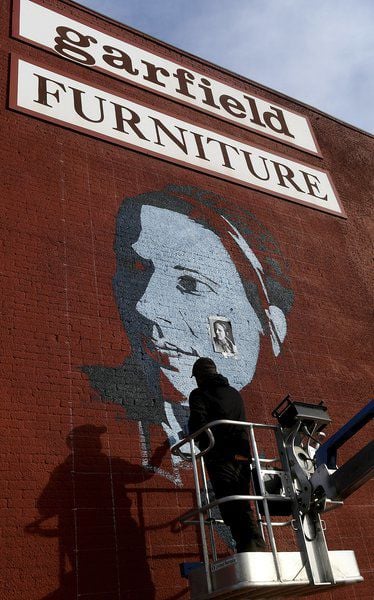 Jake Fowler paints a portrait of Amanda Brooks on the south side of Garfield Furniture on Wednesday, Nov. 28, 2018. (Bonnie Vculek / Enid News & Eagle)

Jake Fowler positions his lift as he paints a portrait of Amanda Brooks on the south side of Garfield Furniture on Wednesday, Nov. 28, 2018. (Bonnie Vculek / Enid News & Eagle)

Jake Fowler paints a portrait of Amanda Brooks on the south side of Garfield Furniture on Wednesday, Nov. 28, 2018. (Bonnie Vculek / Enid News & Eagle)

ENID, Okla. — An Oklahoma City artist is finishing up painting a portrait of an Enid waitress on the side of Garfield Furniture in downtown Enid.

Portrait artist Jack Fowler is nearly done painting Amanda Brooks, a waitress at Youngblood Grille. He expects to be finished as early as Friday, or into next week. The portrait is on the south side of Garfield Furniture.

"We’re members of Main Street Enid, have been since the beginning, and they’re working on bringing some more public art into downtown Enid and I like art and I like murals," Garfield Furniture owner Russ Frazee said.

The company started with a Chisholm Trail mural on one of its walls, followed afterward by an Owl Cigar mural.

"Then I wanted a mural of what I call an ‘Enid woman’ and I must have looked through thousands of images, and then when I discovered the image I wanted was right in front of me, right here in Enid, and it all just worked out," Frazee said.

Frazee said he eats at Youngblood Grille regularly, saw the waitress one day and the idea clicked in his brain — and the rest was history. He said Brooks reacted "very positive" when approached about the portrait.

With the help of Main Street Enid, Frazee was able to get in touch with Fowler through one of his friends. Fowler met with Brooks recently to get a photograph for the portrait and began working on the wall Monday morning.

By Thursday afternoon, Fowler was mostly working on details on the portrait.

"It’s been great. I’ve never really been to Enid before and the town’s been really cool," Fowler said. "Amanda’s been really laid back about the whole thing ... How cool is that to just go about your everyday life and some stranger says that he wants to put your face on his building and it’ll be up there for however many years? I think it’s really cool the more I think about it. (I’m) honored to do it."

Frazee said he hopes to have one or two more murals painted in the future. He said the recent emergence of art around downtown will give visitors something to explore.

"When they get the hotel finished and even now, there’s more people downtown walking and shopping and doing what they do down here, and it gives them something to look at and wonder about," Frazee said. "The word is getting out (that) Enid is artist friendly."

It's a sentiment shared by Fowler. He's done three murals in Oklahoma City, and this is his first outside that. He said four other art pieces in town have been done by friends of his from the city.

"You guys are getting sort of a reputation as a place we can come work, and I think that’s really cool," Fowler said. "Most little towns don’t do that. So I’ve really admired that, driving around and looking ... It’s been great and I’m ready to come back and do another one."