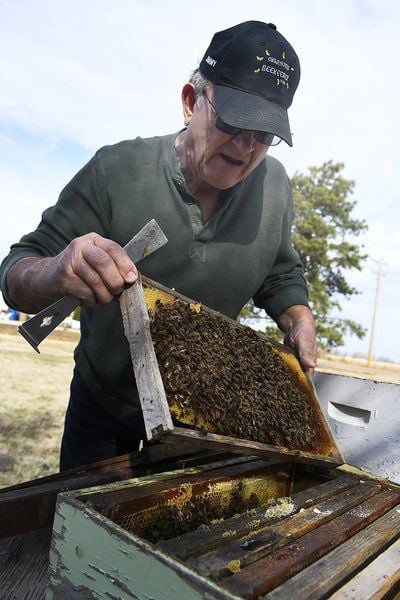 Jimmy Shobert pulls a frame of bees from one of his hives at his home near Laverne in this March 2019 file photo. 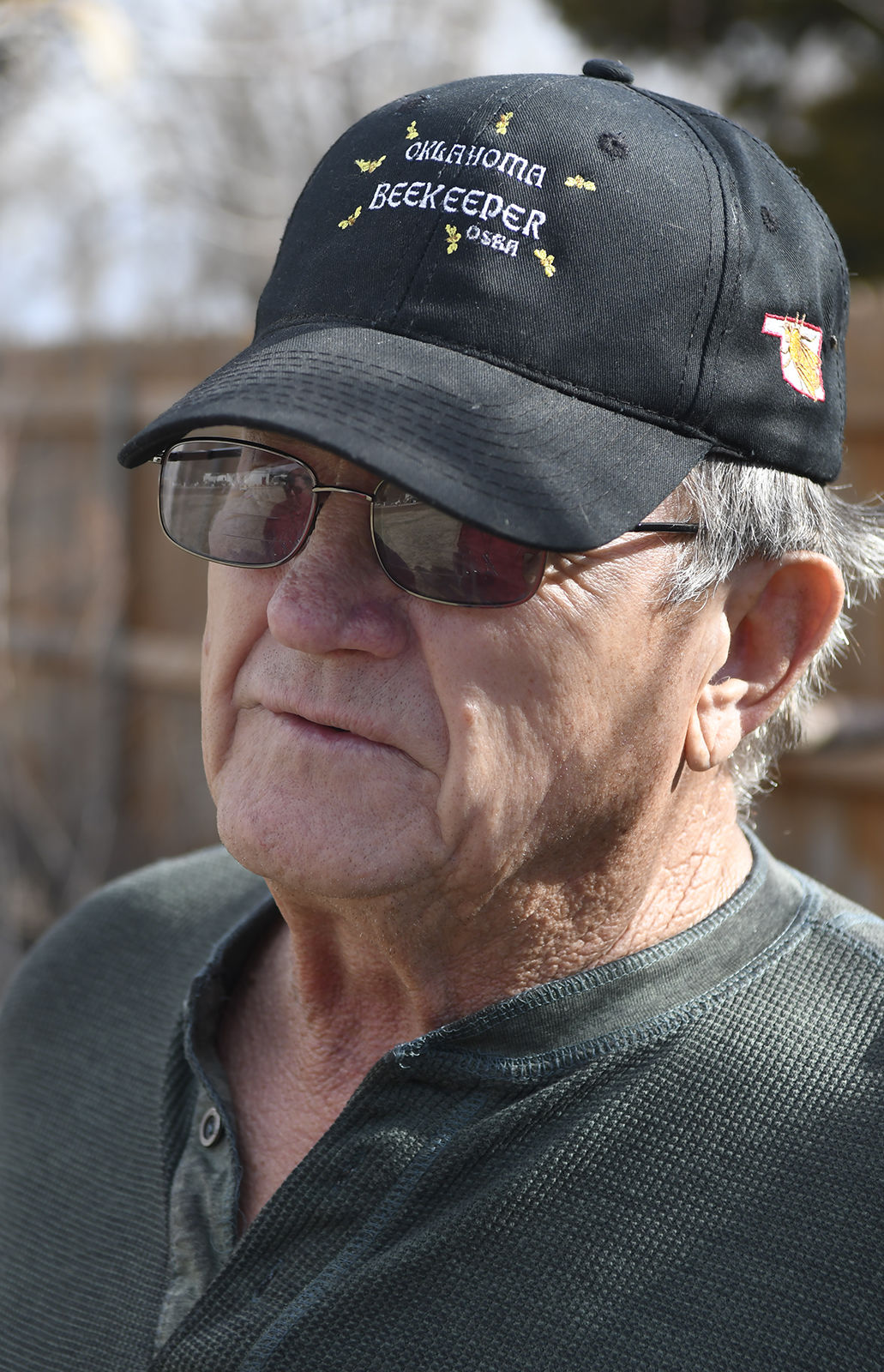 Jimmy Shobert, 2018 Oklahoma Beekeeper of the Year, speaks at his home near Laverne in this March 2019 file photo. (Photo by Billy Hefton) 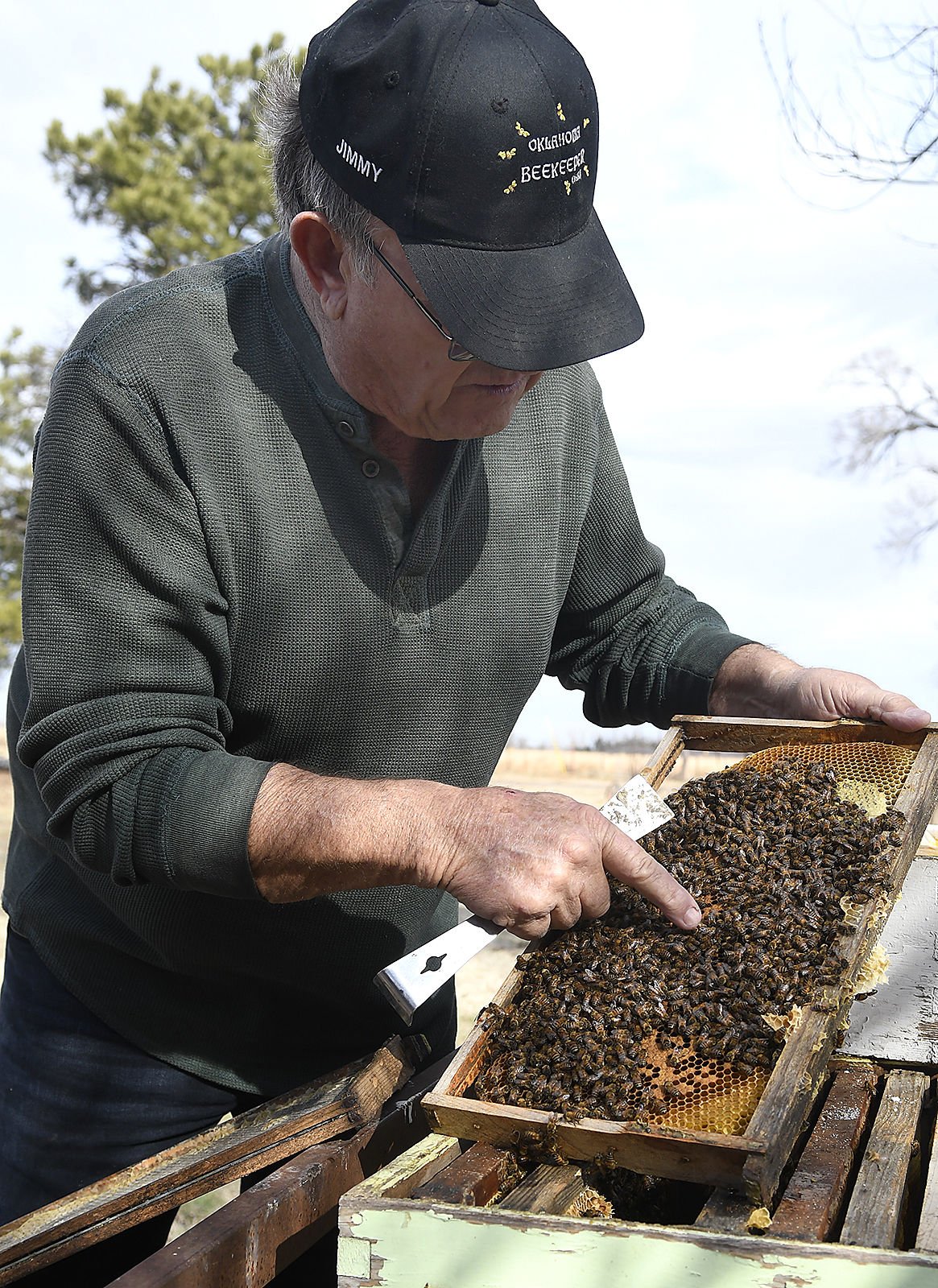 Left: Jimmy Shobert points out the queen bee in one of his hives at his home near Laverne in this March 2019 file photo. (Photo by Billy Hefton) 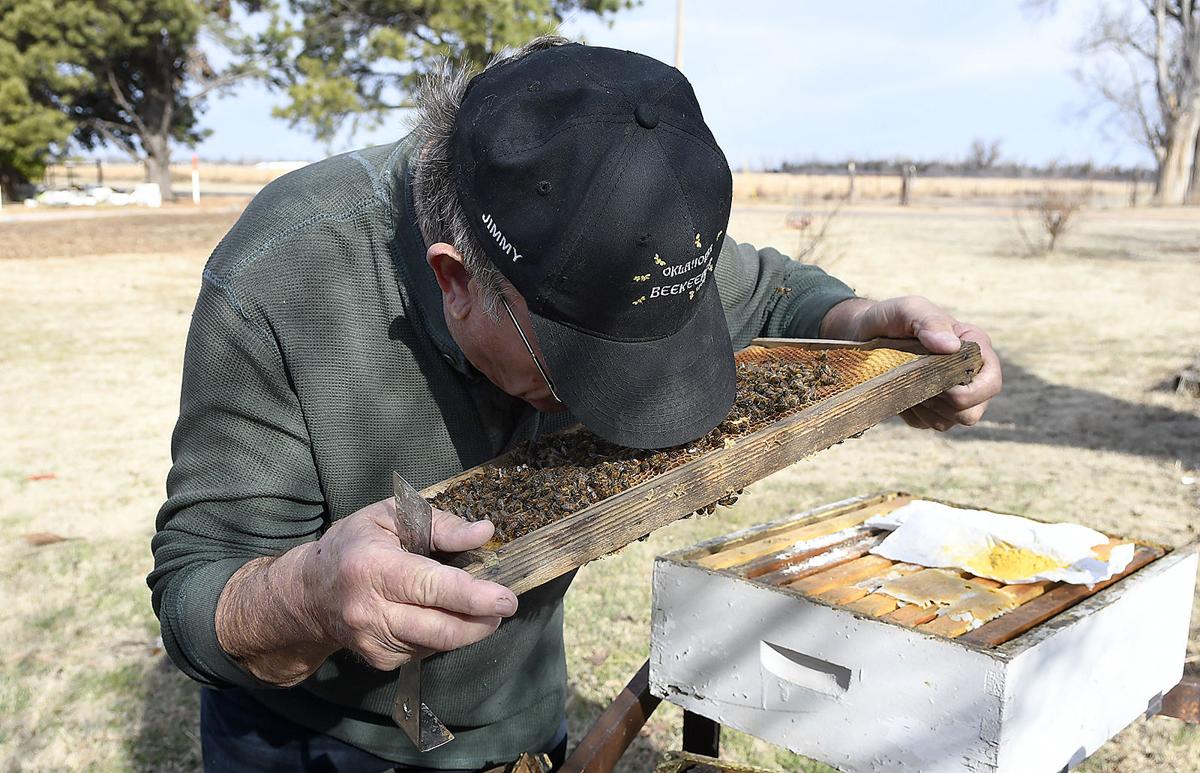 Jimmy Shobert takes a close look at a frame of bees from one of his hives at his home near Laverne in this March 2019 file photo.

Jimmy Shobert pulls a frame of bees from one of his hives at his home near Laverne in this March 2019 file photo.

Jimmy Shobert, 2018 Oklahoma Beekeeper of the Year, speaks at his home near Laverne in this March 2019 file photo. (Photo by Billy Hefton)

Left: Jimmy Shobert points out the queen bee in one of his hives at his home near Laverne in this March 2019 file photo. (Photo by Billy Hefton)

Jimmy Shobert takes a close look at a frame of bees from one of his hives at his home near Laverne in this March 2019 file photo.

With spring just around the corner, many Oklahomans are looking to their flowerbeds and backyards and thinking of bees.

Recent years’ declines in the bee population have raised concerns for the humble honey bee, and the invaluable role the bees play in pollinating the food we eat.

For those budding apiarists, there are few sources available in the region as authoritative on the subject as Jimmy Shobert, president of Northwest Oklahoma Beekeepers Association.

Shobert has been keeping bees for 33 years, and was named Oklahoma Beekeeper of the Year in 2018.

Like many beekeepers, Shobert said it all started with a fascination for the bees, and a desire to share in the spoils of their labor.

“An old man at Gage gave me a couple of hives, and I thought that would be cool — to have my own honey,” Shobert said.

It didn’t take long for the passion for beekeeping to take hold, or for his hobby to grow into a full-fledged business.

At the height of his beekeeping career, Shobert maintained 75 hives, while also working a full-time job for Oklahoma Department of Transportation.

“I’d come home from work every day and rob my bees,” Shobert said with a laugh, recalling hours spent each day during the summer months, harvesting honey.

He’s kept at it because of a love for both the bees and their honey.

“I enjoy it,” Shobert said. “I love to know I’m getting real honey.”

For Shobert, “real honey” means it’s produced locally, using the bees’ natural process, and is not diluted or cut with sweeteners or artificial ingredients.

Once in a while, Shobert said he still gets people calling and asking for sugar-free honey. He has a tongue-in-cheek response to their request.

“I like to tell them, ‘Well, I got all my bees to sit down with me, and we had a little powwow, and they thought maybe next year they’d make some sugar-free honey, but they’re having a hard time finding sugar-free flowers.’”

Shobert is one of only a handful of beekeepers in Northwest Oklahoma licensed by the Health Department to sell honey in grocery stores. And, to keep the quality within his control, Shobert said when the produce of his hives is sold out, that’s it until the next season — he does not import and rebottle honey from other areas.

The output of a hive or a group of hives depends largely on the weather conditions that year, Shobert said. Dry conditions last year yielded below-average production from his hives.

His all-time high production year was in 2000, when his hives produced about 380 pounds of honey each.

But, Shobert said beekeepers can get into trouble in a hurry if they take too much honey from the hives, as it is the bees’ food source. Going into winter, Shobert said he leaves about 60 pounds of honey in the hive to get the bees through the cold months.

The process of beekeeping has become more difficult over the last 20 years or so, Shobert said, due to an increase in the use of herbicides, pesticides and fungicides on crops — all of which has made it harder for bees to obtain the types and amount of pollen they need. Pollen makes up about 90% of the food source for newly-hatched and juvenile bees, and about 10% of the food source for adult bees.

Changes in agriculture and the emergence of non-native pests have made beekeeping a much more deliberate undertaking.

“When I first started, you’d just put your hives out where the flowers were and then get them back in the fall, and you’d easily pull 60 pounds of honey out of them,” Shobert said.

Now, good beekeeping requires moving the hives to account for spraying on nearby fields and being ever-vigilant for mites and hive beetles, both of which can be deadly to a hive.

Colony collapse — the loss of bees in a geographic area — has been a concern in the United States for years. There was hope the bee was making a comeback in recent years, according to a 2018 fact sheet provided by the Environmental Protection Agency, which found about 23-28% of hives in the United States were dying off over the winter, to be replaced in the spring.

But, the 2019-2020 winter saw a reversal of recent gains, with almost 40% of the nation’s bee population dying off in a matter of months.

Shobert said that kind of news has caused a significant increase in interest for his beekeeping courses. The majority of the students in his classes now are there, at least in part, because of an interest in boosting the bee population.

While that’s a noble goal, Shobert cautioned against underestimating the amount of work that goes into successfully maintaining bee hives.

“I would recommend, if someone is interested in having bee hives, to find a beekeeper in your area and work with them for a season before you try it on your own,” he said.

Also, the cost of setting up two hives — the minimum Shobert recommends for a sustainable operation — runs upward of $1,000, including the bee suit and needed equipment.

Shobert advised aspiring apiarists to be comfortable with one unavoidable outcome — you will be stung.

“When you’re working with bees, and you have 50,000 to 60,000 bees in a hive, you’re going to get stung,” he said. He recommended anyone interested in beekeeping to first know for sure whether or not they are allergic to bee stings.

But, there are other ways to support the region’s bees. If you find a hive that needs to be removed, instead of killing the bees, you can contact Shobert at (620) 660-5247, and he will help coordinate a beekeeper to safely remove the hive.

Property owners also can plant pollinator-friendly garden plants, and refrain from mowing blooming dandelions and other food sources. In some parts of the state, Shobert said, bees are doing better in populated areas than in farm land, and there’s many native plants you can put in a home garden to make the area more appealing for and supportive of bees, butterflies and other pollinators.

The Tulsa Zoo has published an online guide, “Native Plants for Native Pollinators in Oklahoma,” available at https://tul sazoo.org/wp-content/uploads/2015/08/Pollinator-Guide.pdf.

Conservation Coalition of Oklahoma also provides a guide for “How to Build a Pollinator Garden this Spring,” available at https://www.oklahomaconservation.org/build-pollinator-garden.