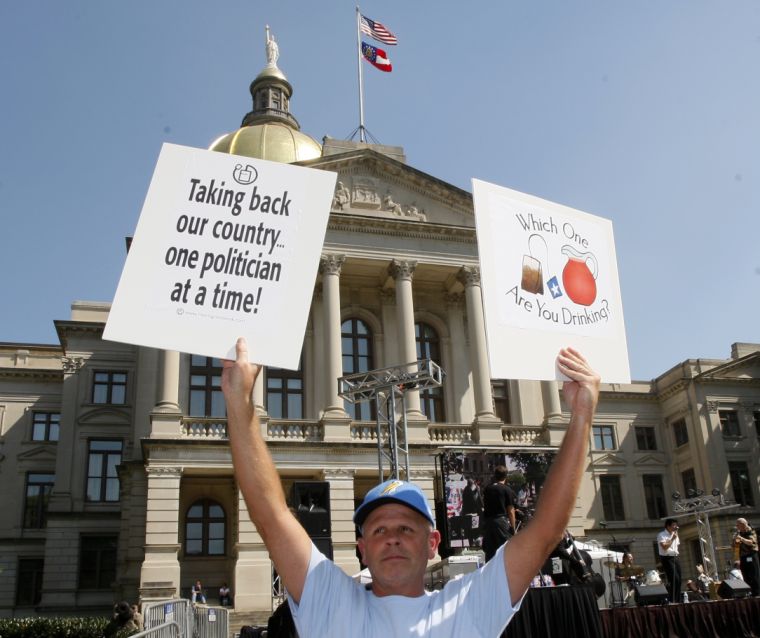 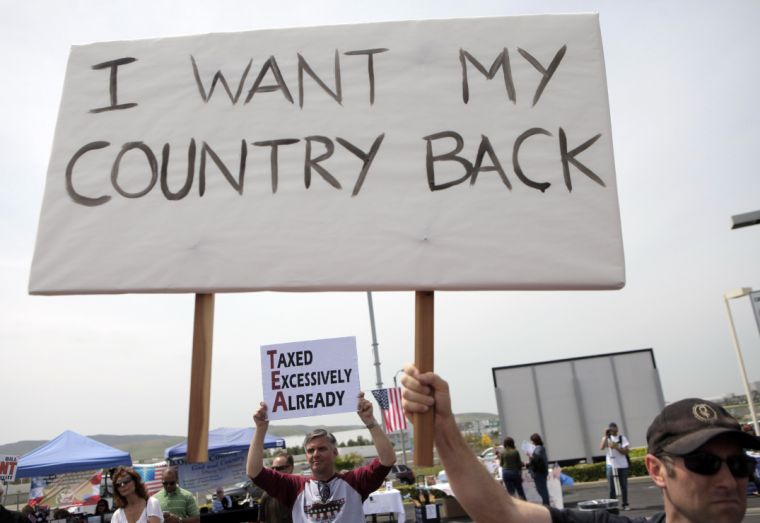 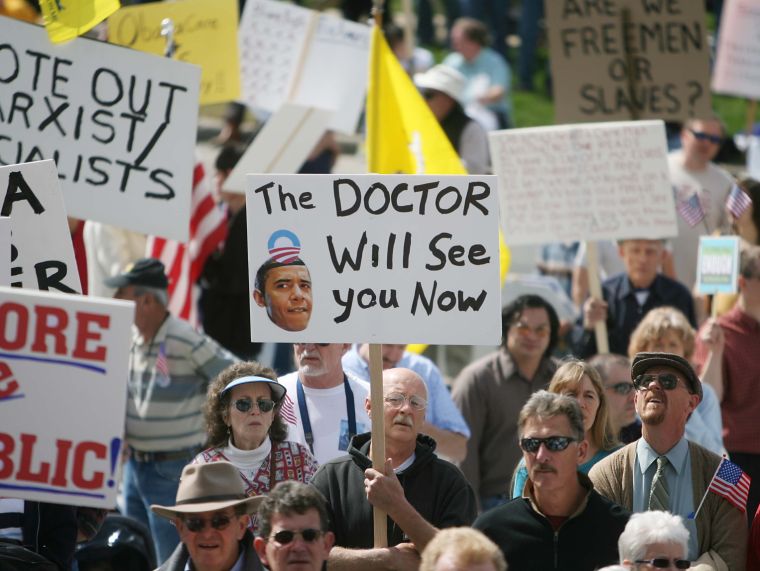 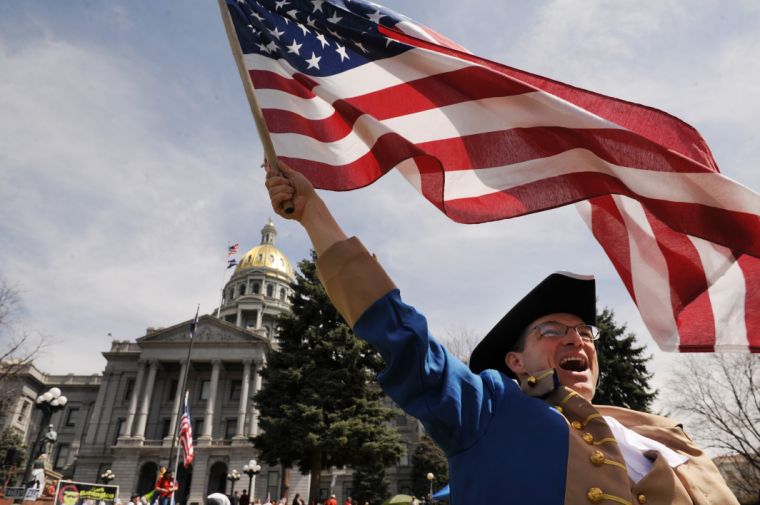 Tea Party member, Dave Privett, 47, of Parker, Colo. waves an American Flag while dressed as a patriot during a rally at the State Capitol in Denver, Colo. on Thursday April 15, 2010 (AP Photo/The Denver Post, Matt McClain) MANDATORY CREDIT; MAGS OUT; NO SALES; TV OUT

Tea Party member, Dave Privett, 47, of Parker, Colo. waves an American Flag while dressed as a patriot during a rally at the State Capitol in Denver, Colo. on Thursday April 15, 2010 (AP Photo/The Denver Post, Matt McClain) MANDATORY CREDIT; MAGS OUT; NO SALES; TV OUT

Tea party protesters marked tax day Thursday with exhortations against “gangster government” and appeals from Republicans seeking their grass-roots clout in November elections, a prospect both tempting and troubling to those in the loose movement.

Several thousand rallied in Washington’s Freedom Plaza in the shadow of the Ronald Reagan office building, capping a national protest tour launched in the dust of Nevada and finishing in the capital that inspires tea party discontent like no other place. Allied activists demonstrated from Maine to Hawaii in hundreds of lively protests, all joined in disdain for government spending and — on the April 15 federal tax filing deadline — what they see as the Washington tax grab.

The Washington rally in brilliant sunshine was spirited but modest in size, lacking the star power of tea party favorite Sarah Palin, who roused the masses at earlier stops of the Tea Party Express in its cross-country bus tour. Republican Rep. Michele Bachmann of Minnesota won roars of affirmation as she accused President Barack Obama and congressional Democrats of trying to take over health care, energy, financial services and other broad swaths of the economy.

“We’re on to this gangster government,” she declared. “I say it’s time for these little piggies to go home.”

She appealed directly for tea partiers to swing behind “constitutional conservatives” in congressional campaigns, just as they contributed to Scott Brown’s upset in the Massachusetts Senate race in an early test of their potency. “I am the No. 1 target for one more extremist group to defeat this November,” she said. “We need to have your help for candidates like me. We need you to take out some of these bad guys.”

Although Republicans are ideological allies of many tea partiers — and GOP operatives are involved in some of the organizations — they are also part of the establishment that many in the movement want to upend. No members of the Republican congressional leadership were featured at the capital rally.

In Wisconsin, a half dozen tea party groups from around the state decided to boycott Thursday’s rally in Madison because former Republican Gov. Tommy Thompson was among the speakers.

“We do feel it’s important that people know this is not who we would ever align ourselves with,” said Kirsten Lombard, organizer of the Madison-based tea party group Wisconsin 9/12 Project. Tim Dake, organizer of the Milwaukee-based GrandSons of Liberty, said: “Tommy is representative of the old boy network way of doing things.”

A similar sentiment was seen on a sign carried by a tea party member in Washington: “Reelect No One.”

But plenty of Republican hopefuls came forward at rallies around the country, hoping to tap the energy and anger for political ends. In Louisville, Ky., Rand Paul, an outsider who has become a leading contender for the Republican Senate nomination, declared, “I’m clinging to my guns, my religion and my ammunition” and added: “We were intended to be a constitutional Republic. Yet, we have devolved into some kind of mad democracy.”

Worried about liberal infiltrators, Kevin Terrell, a self-described colonel in the Ohio Valley Freedom Fighters militia based in Louisville, led about two dozen camouflaged followers on a patrol around the park. “I’m a little apprehensive because of the left-wing nut jobs out there,” Terrell said.

Comedian Mark Klein told the crowd that the difference between Obama and terrorist Osama bin Laden is that “one is an anti-capitalist trying to destroy America. The other is hiding in Afghanistan.”

Police estimate 1,200 showed up in Hartford, Conn., where one sign plainly took sides: “Dump All Democrats.” At least 1,000 paraded through downtown Boise, Idaho; about 500 rallied in Oklahoma City. In Montpelier, Vt., where 60 people mocked the government in song and word, Linda Chagnon, a 57-year-old caregiver from Burlington, carried a sign that read: “Give Me Liberty, Not Debt.”

“We have to manage our own budgets and our homes, we have to cut our expenses, we have to go without,” she said. “This top-heavy government needs to be downsized. I downsize my home, they can downsize the government and still get the main things done and let the people do their thing.”

About 300 turned out to watch former House Speaker Newt Gingrich, architect of the GOP’s Contract with America agenda in the 1990s, sign the tea party’s “Contract From America.” He told the crowd that the GOP needs the support of tea partiers and if they drift into a third party, the opposition to Democrats would be split.

In Washington, the anger was directly firmly at Obama and Democratic congressional leaders. The crowd chanted, “There’s a communist in the White House” at the urging of the ukelele-playing Victoria Jackson, a former cast member on “Saturday Night Live.”

The slogans on signs and T-shirts were biting, sometimes raw: “We Want Regime Change,” “Save a Seal, Club a Liberal,” “Down with the Gov’t Takeover,” “End the Fed” and “Waterboard Bernanke.” Some American flags waved upside down in the breeze.

The tax code was the villain of the day. “We have got to take the country back by taking back the money they take from us,” Jim Tomasik of FairTax Nation told the crowd.

Lost in the rhetoric was that taxes have gone down under Obama. Congress has cut individuals’ federal taxes for this year by about $173 billion, leaving Americans with a lighter load despite nearly $29 billion in increases by states. Obama plans to increase taxes on the wealthy to help pay for his health care overhaul and other programs.

In Chicago, three Republicans running to unseat Democratic House members appeared before a rally of thousands at a plaza outside City Hall. One, Joel Pollak, sang a song he wrote, with the verse: “Don’t tax our freedom away.” Protester Bob Borders of Prospect Heights held a sign asking people to honk if he was paying their mortgage.

In Austin, Texas, Republican Gov. Rick Perry warned tea party organizers in a conference call to watch their backs for liberals trying to make them look bad. “You can bet that every dirty trick is going to get played on tea parties, trying to marginalize them, trying to make them into something that they’re not,” said Perry, a frequent Washington basher who capitalized on the movement to defeat Sen. Kay Bailey Hutchison in the March primary election for governor.

Perry was referring to plans by opponents of the tea party to infiltrate events, pose as followers and act outrageously to taint the movement.

One such episode unfolded in Madison, when a small group opposing the tea party walked through the crowd carrying satirical signs, one saying: “Obama Hates America (and kittens).”

At an Austin rally, Jim Dillon walked through the crowd carrying on his shoulder an AK-47 that he said was unloaded and legal. A state trooper stopped him, examined the weapon and let him continue walking with it. “Our rights are hanging by a thread already as it is,” Dillon said, referring to the constitutional right to bear arms. “If we don’t exercise our rights frequently, we’ll lose them.”

And in Lansing, Mich., more than 1,000 sign-waving protesters cheered calls for tax cuts and states rights. “We have lived eight years of liberal Democratic leadership and Michigan is in shambles,” Joan Fabiano of Grassroots in Michigan told the crowd. In Colorado, about 2,000 rallied in Denver and another 2,000 in Colorado Springs.

Democratic House Speaker Nancy Pelosi, a prime figure in the tea party’s rogues gallery, said that if tea partiers will be coming after Democrats in November, they are coming after some Republicans first, trying to replace them with more conservative candidates. “I think it’s going to have an impact on Republicans in November,” she said. “Some of the competition we see is in their primaries.”

She demurred when asked if Democrats should be promoting big counter-demonstrations. “I don’t know that anyone needs my encouragement,” she said. “The First Amendment is alive and well right outside my window. I can attest to that.”

The services celebrating and honoring the life of Steve Vernon Reeves, 55, of Enid, formerly of Muskogee, are pending under the direction of Brown-Cummings Funeral Home. Condolences may be shared with the family online at www.Brown-Cummings.com.

The services celebrating and honoring the life of Loren Foster, 79, of Enid, are pending under the direction of Brown-Cummings Funeral Home. Condolences may be shared with the family online at www.Brown-Cummings.com.