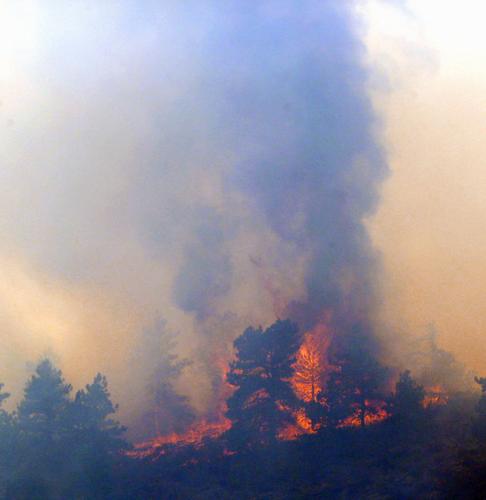 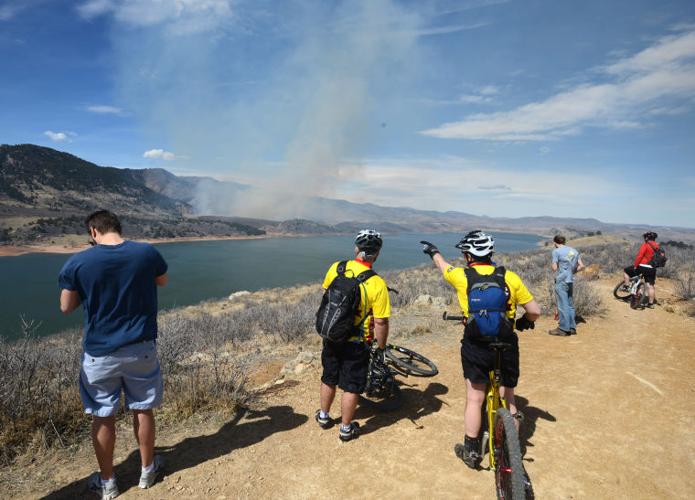 Onlookers stop to watch the fire on the east side of Horsetooth Reservior west of Fort Collins, Colo., on Friday, March 15, 2013. The 40-acre wildfire burning in gusty winds and warm weather was threatening homes west of Fort Collins on Friday and prompted about 50 people to leave the area. (AP Photo/The Coloradoan, V. Richard Haro)

Onlookers stop to watch the fire on the east side of Horsetooth Reservior west of Fort Collins, Colo., on Friday, March 15, 2013. The 40-acre wildfire burning in gusty winds and warm weather was threatening homes west of Fort Collins on Friday and prompted about 50 people to leave the area. (AP Photo/The Coloradoan, V. Richard Haro)

A wildfire driven by erratic winds charred up to 1,000 acres and threatened more than 50 homes in northern Colorado on Friday, prompting hundreds of evacuation orders.

Firefighters saved two homes and a state park visitors’ center from flames, authorities said. They said no homes had been destroyed.

The fire began Friday west of Fort Collins and was burning west of Horsetooth Reservoir, near the scene of a large wildfire last summer that burned 259 homes and killed one person.

The Larimer County Sheriff’s Department said 860 phone lines got automated calls ordering evacuations Friday, but some addresses have multiple lines and other numbers were cellphones, so the exact number of homes in the evacuation area was not known.

Residents of a neighborhood north of the fire were allowed to go home Friday night. Authorities said 281 evacuation calls had been made to that area.

Some people believed to be hiking in Lory State Park were unaccounted for, but sheriff’s spokesman Nick Christensen said they were not believed to be in imminent danger. Park rangers were looking for them.

The fire was between 750 and 1,000 acres by late Friday, said Capt. Matt Housley of Poudre Fire Authority. It was 5 percent contained.

The cause of the fire was under investigation.

“We’ve had variable and erratic winds all day long,” said Patrick Love, a spokesman for the Poudre Fire Authority.

The sudden shift prompted deputies and state troopers to barricade a neighborhood on the southwest side of the reservoir that hadn’t been officially evacuated.

“It’s pretty ridiculous to shut things down and not let anyone know,” said Mark Martina, a mortgage broker who was heading home to get his dog when he reached the new roadblock not far from his house.

When authorities began allowing some residents back in for brief visits to retrieve valuables, Martina said he planned to stay as long as necessary to collect birth certificates, guns and other important items.

“I’m not a complete idiot. I’m going to leave if it’s coming close,” he said.

Chicago resident Terry Jones and his family were in a vacation house they own when they saw smoke billowing toward them, and then officers pounded on their door and told them to leave.

Late Friday afternoon, as the sun turned hillsides pink and smoke obscured the reservoir, Jones was asked if he’d rather be back home in Chicago.

2 Lawmakers Want Colorado To Have Its Own Wildfire-Fighting Planes

The fire came as much of the state dealt with drought conditions after a relatively dry winter. The snowpack in the mountains was low, leaving farmers wondering how many crops to plant and raising the possibility of lawn-watering restrictions along the Front Range.

“This is a really bad start,” said Angela Dietrich, whose home was not in the fire’s immediate path but was shrouded by smoke.